Just as individuals cannot have everything they want and must instead make choices, society as a whole cannot have everything it might want, either. This section of the tutorial will explain the constraints faced by society, using a model called the production possibilities frontier (PPF). There are more similarities than differences between individual choice and social choice. As you read this section, focus on the similarities.

Because society has limited resources (e.g., labor, land, capital, raw materials) at any point in time, there is a limit to the quantities of goods and services it can produce. Suppose a society desires two products, healthcare and education. This situation is illustrated by the production possibilities frontier in this figure. 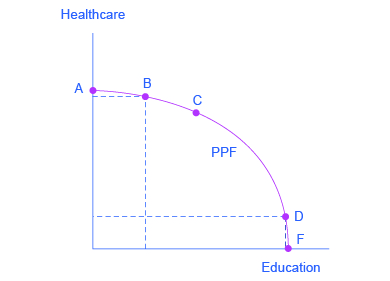 In this figure, healthcare is shown on the vertical axis and education is shown on the horizontal axis. If the society were to allocate all of its resources to healthcare, it could produce at point A. But it would not have any resources to produce education. If it were to allocate all of its resources to education, it could produce at point F. Alternatively, the society could choose to produce any combination of healthcare and education shown on the production possibilities frontier. In effect, the production possibilities frontier plays the same role for society as the budget constraint plays for Alphonso. Society can choose any combination of the two goods on or inside the PPF. But it does not have enough resources to produce outside the PPF.

Most important, the production possibilities frontier clearly shows the tradeoff between healthcare and education. Suppose society has chosen to operate at point B, and it is considering producing more education. Because the PPF is downward sloping from left to right, the only way society can obtain more education is by giving up some healthcare. That is the tradeoff society faces. Suppose it considers moving from point B to point C. What would the opportunity cost be for the additional education? The opportunity cost would be the healthcare society has to give up. Just as with Alphonso’s budget constraint, the opportunity cost is shown by the slope of the production possibilities frontier. By now you might be saying, “Hey, this PPF is sounding like the budget constraint.” If so, read the following Clear It Up feature.

There are two major differences between a budget constraint and a production possibilities frontier. The first is the fact that the budget constraint is a straight line. This is because its slope is given by the relative prices of the two goods. In contrast, the PPF has a curved shape because of the law of the diminishing returns. The second is the absence of specific numbers on the axes of the PPF. There are no specific numbers because we do not know the exact amount of resources this imaginary economy has, nor do we know how many resources it takes to produce healthcare and how many resources it takes to produce education. If this were a real world example, that data would be available. An additional reason for the lack of numbers is that there is no single way to measure levels of education and healthcare. However, when you think of improvements in education, you can think of accomplishments like more years of school completed, fewer high-school dropouts, and higher scores on standardized tests. When you think of improvements in healthcare, you can think of longer life expectancies, lower levels of infant mortality, and fewer outbreaks of disease.