The PPF and Comparative Advantage

The PPF and Comparative Advantage

While every society must choose how much of each good it should produce, it does not need to produce every single good it consumes. Often how much of a good a country decides to produce depends on how expensive it is to produce it versus buying it from a different country. As we saw earlier, the curvature of a country’s PPF gives us information about the tradeoff between devoting resources to producing one good versus another. In particular, its slope gives the opportunity cost of producing one more unit of the good in the x-axis in terms of the other good (in the y-axis). Countries tend to have different opportunity costs of producing a specific good, either because of different climates, geography, technology or skills.

Suppose two countries, the US and Brazil, need to decide how much they will produce of two crops: sugar cane and wheat. Due to its climatic conditions, Brazil can produce a lot of sugar cane per acre but not much wheat. Conversely, the U.S. can produce a lot of wheat per acre, but not much sugar cane. Clearly, Brazil has a lower opportunity cost of producing sugar cane (in terms of wheat) than the U.S. The reverse is also true; the U.S. has a lower opportunity cost of producing wheat than Brazil. This can be illustrated by the PPFs of the two countries in this figure

Production Possibility Frontier for the U.S. and Brazil 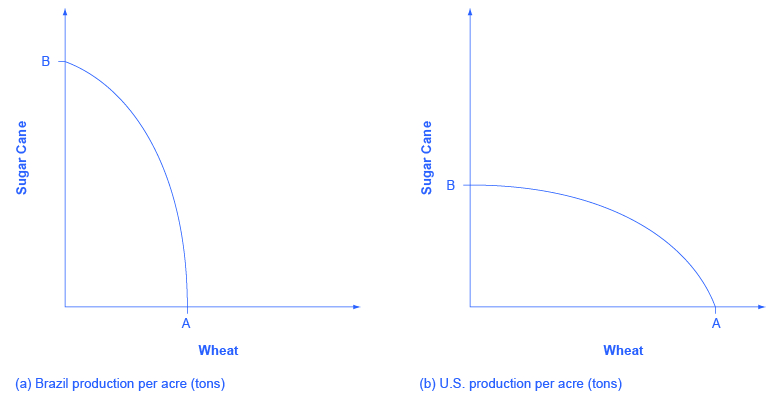 When a country can produce a good at a lower opportunity cost than another country, we say that this country has a comparative advantage in that good. In our example, Brazil has a comparative advantage in sugar cane and the U.S. has a comparative advantage in wheat. One can easily see this with a simple observation of the extreme production points in the PPFs of the two countries. If Brazil devoted all of its resources to producing wheat, it would be producing at point A. If however it had devoted all of its resources to producing sugar cane instead, it would be producing a much larger amount, at point B. By moving from point A to point B Brazil would give up a relatively small quantity in wheat production to obtain a large production in sugar cane. The opposite is true for the U.S. If the U.S. moved from point A to B and produced only sugar cane, this would result in a large opportunity cost in terms of foregone wheat production.

The slope of the PPF gives the opportunity cost of producing an additional unit of wheat. While the slope is not constant throughout the PPFs, it is quite apparent that the PPF in Brazil is much steeper than in the U.S., and therefore the opportunity cost of wheat generally higher in Brazil. In the tutorial on International Trade you will learn that countries’ differences in comparative advantage determine which goods they will choose to produce and trade. When countries engage in trade, they specialize in the production of the goods that they have comparative advantage in, and trade part of that production for goods they do not have comparative advantage in. With trade, goods are produced where the opportunity cost is lowest, so total production increases, benefiting both trading parties.