The study of economics does not presume to tell a society what choice it should make along its production possibilities frontier. In a market-oriented economy with a democratic government, the choice will involve a mixture of decisions by individuals, firms, and government. However, economics can point out that some choices are unambiguously better than others. This observation is based on the concept of efficiency. In everyday usage, efficiency refers to lack of waste. An inefficient machine operates at high cost, while an efficient machine operates at lower cost, because it is not wasting energy or materials. An inefficient organization operates with long delays and high costs, while an efficient organization meets schedules, is focused, and performs within budget. 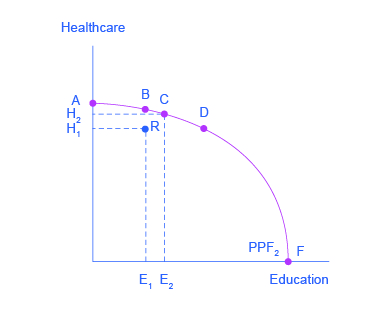 Productive efficiency means it is impossible to produce more of one good without decreasing the quantity that is produced of another good. Thus, all choices along a given PPF like B, C, and D display productive efficiency, but R does not. Allocative efficiency means that the particular mix of goods being produced—that is, the specific choice along the production possibilities frontier—represents the allocation that society most desires.

Productive efficiency means that, given the available inputs and technology, it is impossible to produce more of one good without decreasing the quantity that is produced of another good. All choices on the PPF in this figure, including A, B, C, D, and F, display productive efficiency. As a firm moves from any one of these choices to any other, either healthcare increases and education decreases or vice versa. However, any choice inside the production possibilities frontier is productively inefficient and wasteful because it is possible to produce more of one good, the other good, or some combination of both goods.

The particular mix of goods and services being produced—that is, the specific combination of healthcare and education chosen along the production possibilities frontier—can be shown as a ray (line) from the origin to a specific point on the PPF. Output mixes that had more healthcare (and less education) would have a steeper ray, while those with more education (and less healthcare) would have a flatter ray.

Allocative efficiency means that the particular mix of goods a society produces represents the combination that society most desires. How to determine what a society desires can be a controversial question, and is usually discussed in political science, sociology, and philosophy classes as well as in economics. At its most basic, allocative efficiency means producers supply the quantity of each product that consumers demand. Only one of the productively efficient choices will be the allocatively efficient choice for society as a whole.