Proteins are made of amino acids. There are 20 common amino acids from which all proteins in living organisms are made. Nine of them are considered essential amino acids, as they cannot by synthesised in the body from other compounds, and must be obtained from the diet. Amino acids are bonded together by peptide bonds to form peptides. A long peptide chain forms a protein, which folds into a very specific three-dimensional shape. This three-dimensional shape is completely determined by the identity and order of the amino acids in the peptide chain. We often refer to four different levels of protein structure (see figure below):

Because the sequence of amino acids determines the way that a protein folds, if you start with a certain peptide chain, you will always get the same three-dimensional structure! 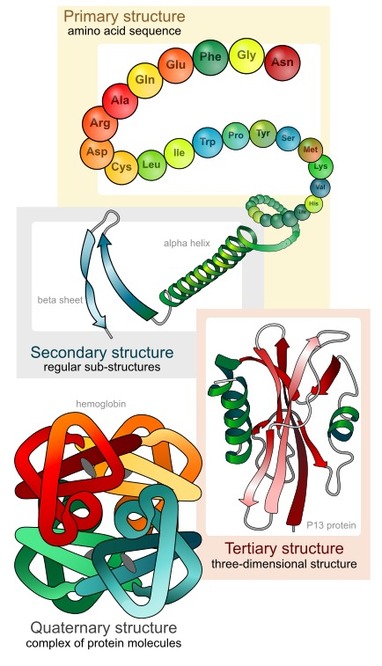 Meat or vegetables: which is a better source of protein?

Therefore when choosing protein-rich foods, pay attention to what comes along with protein. Vegetable sources of proteins such as beans, nuts and whole grain are excellent choices and they offer healthy fibre, vitamins and minerals. The best animal protein sources are fish and poultry.