An organic compound is a compound whose molecules contain C, and usually at least one C-C or C-H bond. Very small carbon-containing molecules that do not follow the above rules, such as CO2 and simple carbonates, are considered inorganic. Life on earth would not be possible without carbon. Other than water, most molecules of living cells are carbon-based, and hence are referred to as organic compounds. The main classes of organic compounds we will investigate in this section include carbohydrates, lipids, proteins and nucleic acids.

Each of these classes of compounds consists of large molecules built from small subunits. The smallest of these subunits is called a monomer. Several monomers bond together to form polymers. Each of these polymers is characterised by a specific structure owing to the chemical bonds formed. These structures are related to the function of the compound in living organisms. We will therefore study each class of compounds under the following headings:

The main function of carbohydrates is as energy storage molecules and as substrates (starting material) for energy production. Carbohydrates are broken down by living organisms to release energy. Each gram of carbohydrate supplies about 17 kilojoules (kJ) of energy. Starch and glycogen are both storage polysaccharides (polymers made up of glucose monomers) and thus act as a store for energy in living organisms. 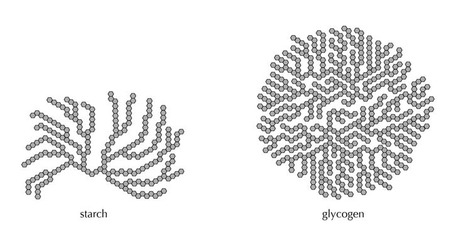 Substances containing starch turn a blue-black colour in the presence of iodine. An observable colour change is therefore the basis of a chemical test for the compound. 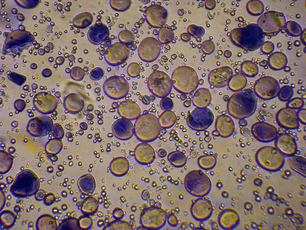