Lipids contain carbon (C), hydrogen (H) and oxygen (O) but have less oxygen than carbohydrates. Examples of lipids in diet include cooking oils such as sunflower and olive oil, butter, margarine and lard. Many nuts and seeds also contain a high proportion of lipids.

When drawing organic molecules, it can easily get confusing writing out all of the ‘C’s and ‘H’s for carbon and hydrogen respectively. Scientists overcome this by drawing the carbon backbone, and leaving out the hydrogens. Carbon will always make 4 bonds with other atoms, so it is easy to figure out how many hydrogens there must be. The carbon is indicated by a point, and the bonds between carbon molecules are indicated by lines joining the points. 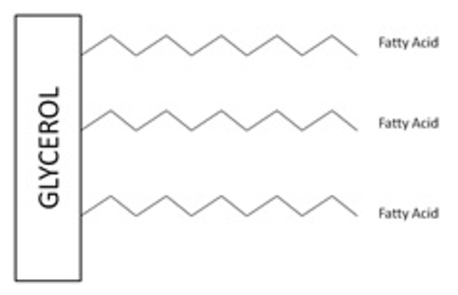 Lipids are an important energy reserve and contain 37.8 kilojoules (kJ) of energy per gram. Triglyceride lipids are broken down to release glycerol and fatty acids. Glycerol can be converted to glucose and used as a source of energy, however the majority of energy provided by lipids comes from the breakdown of the fatty acid chains. Some fatty acids are essential nutrients that cannot be produced by the body and need to be consumed in small amounts. Non-essential fatty acids can be produced in the body from other compounds.

Lipids are important for the digestion and transport of essential vitamins, help insulate body organs against shock and help to maintain body temperature. Lipids also play an important role in cell membranes.

You will learn about the important role that lipids play in cell membranes in the following chapter on the basic units of life.

Carbon can form four bonds with other atoms. Most carbons in a fatty acid chain are bonded to two adjacent carbons, and to two hydrogen atoms. Fatty acids which form four single bonds, and have the maximum number of hydrogen atoms are called saturated fatty acids because they are “saturated” with hydrogen atoms. However, sometimes two adjacent carbons will from a double bond. In this case the carbons taking part in the double bond are each joined to only one hydrogen. 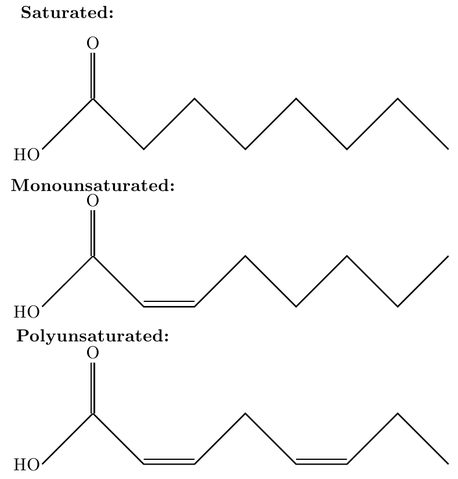 Cholesterol is an organic chemical substance known as a sterol. You are not required to understand its molecular makeup or its structural composition. It is an important component in cell membranes. The major dietary sources of cholesterol include cheese, egg, pork, poultry, fish and shrimp. Cholesterol is carried through the body by proteins in the blood known as lipoproteins. A lipoprotein is any combination of lipid and protein.

You will learn more about how cholesterol can clog arteries and lead to heart disease in a later tutorial lesson on transport systems in animals.

High levels of LDL can cause heart disease. Cholesterol builds up in blood vessels that carry blood from the heart to the tissues and organs of the body, called arteries. This leads to a hardening and narrowing of these vessels, which interferes with the transport of blood, and can potentially lead to a heart attack. The biggest contributor to the amount of cholesterol in your blood is the type of fats you eat. Saturated fats are less healthy than unsaturated fats as they increase the amount of LDL cholesterol in your blood.

The test for lipids relies on the fact that lipids leave a translucent `grease spot’ on brown paper bags, while non-lipid substances do not.

Investigation: Test for the Presence of Lipids

To test for the presence of lipids

Record your observations, noting any key differences between the controls and the experimental sample.