Don’t worry if you didn’t understand the rules, we will look at examples shortly. The following examples illustrate the application of this rule in rounding a few different numbers to three significant figures:

Let’s work through these rules with a few more examples.

Round the following to the indicated number of significant figures:

Addition and Subtraction with Significant Figures

Answer is 5.385 g (round to the thousandths place; three decimal places)

Answer is 65 g (round to the ones place; no decimal places)

Multiplication and Division with Significant Figures

Rule: When we multiply or divide numbers, we should round the result to the same number of digits as the number with the least number of significant figures (the least precise value in terms of multiplication and division).

You might be wondering why we are doing mathematics in chemistry. Well, it turns out that mathematics helps us a lot in science. Also, in the midst of all these technicalities, it is important to keep in mind the reason why we use significant figures and rounding rules—which is to correctly represent the certainty of the values we report and to ensure that a calculated result is not represented as being more certain than the least certain value used in the calculation.

One common bathtub is 13.44 dm long, 5.920 dm wide, and 2.54 dm deep. Assume that the tub is rectangular and calculate its approximate volume in liters.

A piece of rebar is weighed and then submerged in a graduated cylinder partially filled with water, with results as shown. 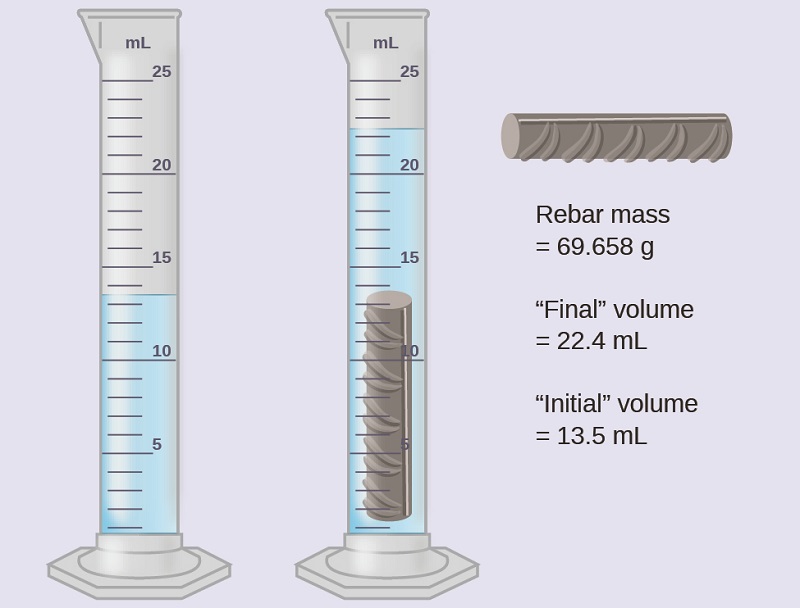 (a) Use these values to determine the density of this piece of rebar.
(b) Rebar is mostly iron. Does your result in (a) support this statement? How?

(rounded to the nearest 0.1 mL, per the rule for addition and subtraction)

The density is the mass-to-volume ratio:

(rounded to two significant figures, per the rule for multiplication and division)

From lesson 21, the density of iron is 7.9 g/cm3, very close to that of rebar, which lends some support to the fact that rebar is mostly iron.