Radioactive elements emit different types of particles. Some of these are positively charged alpha (α) particles. Rutherford wanted to find out where the positive charge in an atom is. He carried out a series of experiments where he bombarded sheets of gold foil with alpha particles (since these would be repelled by the positive nucleus). A simplified diagram of his experiment is shown in the figure below. 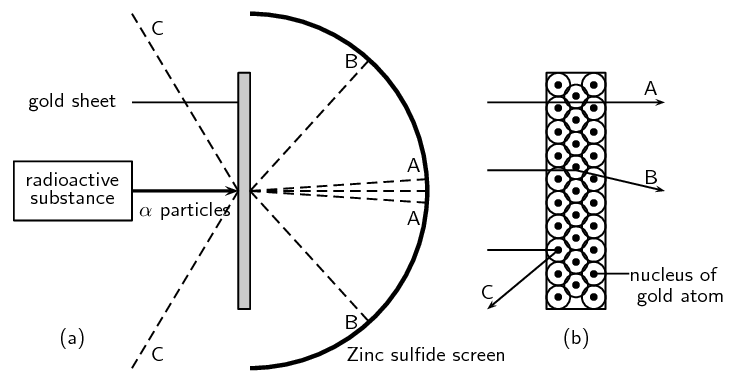 If Thomson’s model of the atom was correct then Rutherford would have observed mostly path A in the figure above. (A represents alpha particles that pass straight through the positive nucleus.) He would not have observed any deflection of the alpha particles. What he found instead was that while most of the alpha particles passed through the foil undisturbed and could be detected on the screen directly behind the foil (path A), some of the particles ended up being slightly deflected onto other parts of the screen (path B)! The fact that some particles were deflected suggested that the positive charge was concentrated in one part of the atom only.

Through this experiment he concluded that the nucleus of the atom is positively charged and situated in the middle of the atom.

This article has been modified from "Atomic Mass And Diameter, by Siyavula, Physical Sciences Grade 10, CC BY 4.0. Download the book for free at www.siyavula.com.