Chemistry » Essential Ideas in Chemistry » Phases and Classification of Matter

The aim of this lesson is to give you an appreciation and a feel for compounds and their constituent elements. You do not necessarily need to understand the underlying processes.

Decomposition of Water and Production of Hydrogen 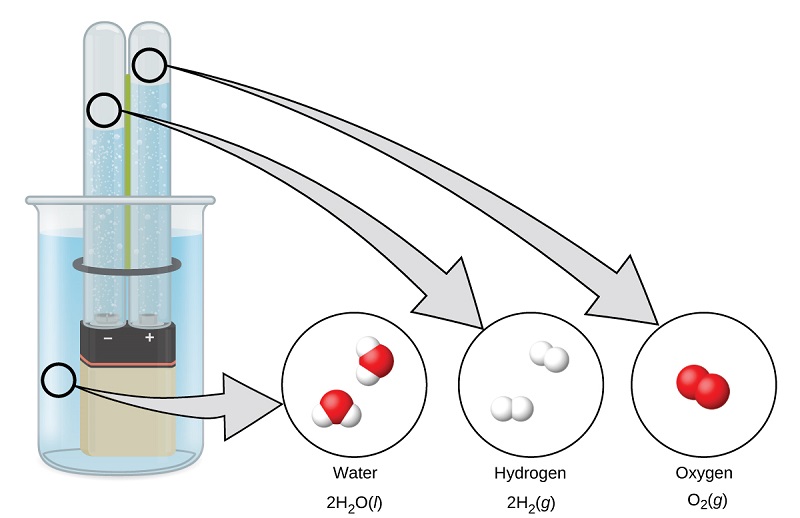 The decomposition of water is shown at the macroscopic, microscopic, and symbolic levels. The battery provides an electric current (microscopic) that decomposes water. At the macroscopic level, the liquid separates into the gases hydrogen (on the left) and oxygen (on the right). Symbolically, this change is presented by showing how liquid H2O separates into H2 and O2 gases. Image credit: OpenStax, Chemistry

The breakdown of water involves a rearrangement of the atoms in water molecules into different molecules, each composed of two hydrogen atoms and two oxygen atoms, respectively. Two water molecules form one oxygen molecule and two hydrogen molecules. The representation for what occurs, \(2\text{H}_2\text{O}_{(l)} \rightarrow 2\text{H}_{2(g)} + \text{O}_{2(g)},\) will be explored in more depth in later lessons.

The two gases produced have distinctly different properties. Oxygen is not flammable but is required for combustion of a fuel, and hydrogen is highly flammable and a potent energy source. How might this knowledge be applied in our world?

One application involves research into more fuel-efficient transportation. Fuel-cell vehicles (FCV) run on hydrogen instead of gasoline (see image below). They are more efficient than vehicles with internal combustion engines, are nonpolluting, and reduce greenhouse gas emissions, making us less dependent on fossil fuels. 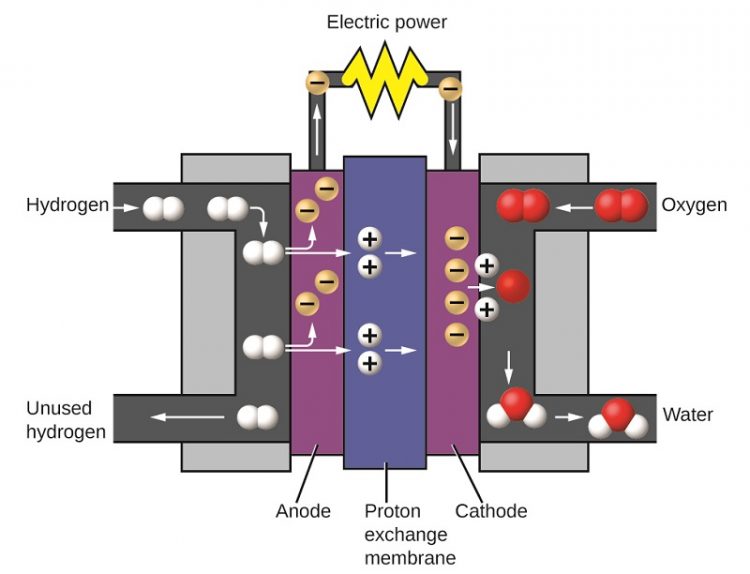 A fuel cell generates electrical energy from hydrogen and oxygen via an electrochemical process and produces only water as the waste product. Image credit: OpenStax, Chemistry

FCVs are not yet economically viable, however, and current hydrogen production depends on natural gas. If we can develop a process to economically decompose water, or produce hydrogen in another environmentally sound way, FCVs may be the way of the future.