The characteristics that enable us to distinguish one substance from another are called properties. A physical property is a characteristic of matter that is not associated with a change in its chemical composition. Familiar examples of physical properties include density, color, hardness, melting and boiling points, and electrical conductivity.

A physical change is a change in the state or properties of matter without any accompanying change in its chemical composition (the identities of the substances contained in the matter). We observe a physical change when wax melts, when sugar dissolves in coffee, and when steam condenses into liquid water (see image below).

Other examples of physical changes include magnetizing and demagnetizing metals (as is done with common anti-theft security tags) and grinding solids into powders (which can sometimes yield noticeable changes in color). In each of these examples, there is a change in the physical state, form, or properties of the substance, but no change in its chemical composition.

The change of one type of matter into another type (or the inability to change) is a chemical property. Examples of chemical properties include flammability, toxicity, acidity, reactivity (many types), and heat of combustion. Iron, for example, combines with oxygen in the presence of water to form rust; chromium does not oxidize (see image below). Nitroglycerin is very dangerous because it explodes easily; neon poses almost no hazard because it is very unreactive. 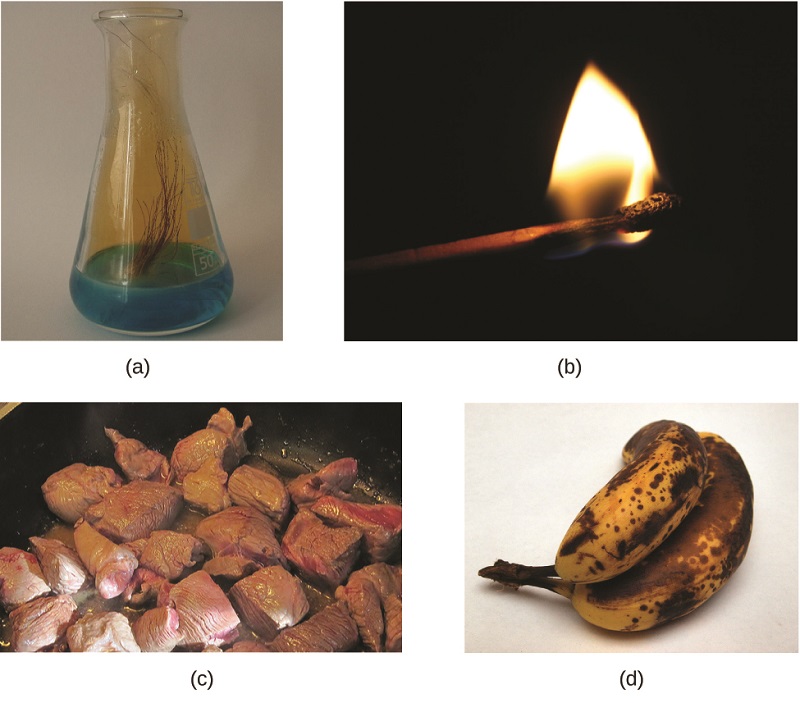 Other examples of chemical changes include reactions that are performed in a lab (such as copper reacting with nitric acid), all forms of combustion (burning), and food being cooked, digested, or rotting (see image above).