Throughout human history, people have tried to convert matter into more useful forms. Our Stone Age ancestors chipped pieces of flint into useful tools and carved wood into statues and toys. These endeavors involved changing the shape of a substance without changing the substance itself.

But as our knowledge increased, humans began to change the composition of the substances as well—clay was converted into pottery, hides were cured to make garments, copper ores were transformed into copper tools and weapons, and grain was made into bread.

Humans began to practice chemistry when they learned to control fire and use it to cook, make pottery, and smelt metals. Subsequently, they began to separate and use specific components of matter. A variety of drugs such as aloe, myrrh, and opium were isolated from plants. Dyes, such as indigo and Tyrian purple, were extracted from plant and animal matter.

Metals were combined to form alloys—for example, copper and tin were mixed together to make bronze—and more elaborate smelting techniques produced iron. Alkalis were extracted from ashes, and soaps were prepared by combining these alkalis with fats. Alcohol was produced by fermentation and purified by distillation.

Attempts to understand the behavior of matter extend back for more than 2500 years. As early as the sixth century BC, Greek philosophers discussed a system in which water was the basis of all things. You may have heard of the Greek postulate that matter consists of four elements: earth, air, fire, and water.

Subsequently, an amalgamation of chemical technologies and philosophical speculations were spread from Egypt, China, and the eastern Mediterranean by alchemists, who endeavored to transform “base metals” such as lead into “noble metals” like gold, and to create elixirs to cure disease and extend life (see image below). 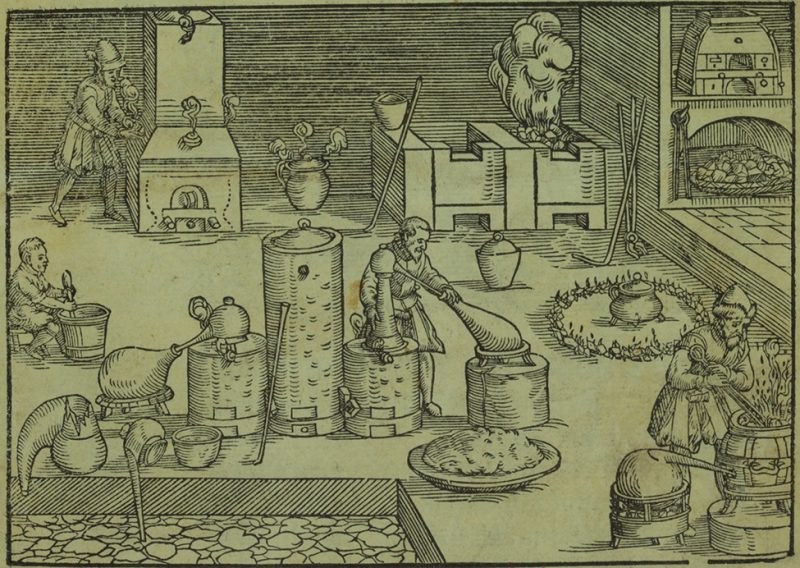 This portrayal shows an alchemist’s workshop circa 1580. Although alchemy made some useful contributions to how to manipulate matter, it was not scientific by modern standards. Image credit: Chemical Heritage Foundation

From alchemy came the historical progressions that led to modern chemistry: the isolation of drugs from natural sources, metallurgy, and the dye industry. Today, chemistry continues to deepen our understanding and improve our ability to harness and control the behavior of matter. This effort has been so successful that many people do not realize either the central position of chemistry among the sciences or the importance and universality of chemistry in daily life.