Chemistry » Essential Ideas in Chemistry » Phases and Classification of Matter

Matter is defined as anything that occupies space and has mass, and it is all around us. Solids and liquids are more obviously matter. We can see that they take up space, and their weight tells us that they have mass. Gases are also matter; if gases did not take up space, a balloon would stay collapsed rather than inflate when filled with gas.

The three most common states or phases of matter are solid, liquid, and gas. Image credit: OpenStax, Chemistry

Solids, liquids, and gases are the three states of matter commonly found on earth (see image above). A solid is rigid and possesses a definite shape. A liquid flows and takes the shape of a container, except that it forms a flat or slightly curved upper surface when acted upon by gravity. (In zero gravity, liquids assume a spherical shape.) Both liquid and solid samples have volumes that are very nearly independent of pressure. A gas takes both the shape and volume of its container. 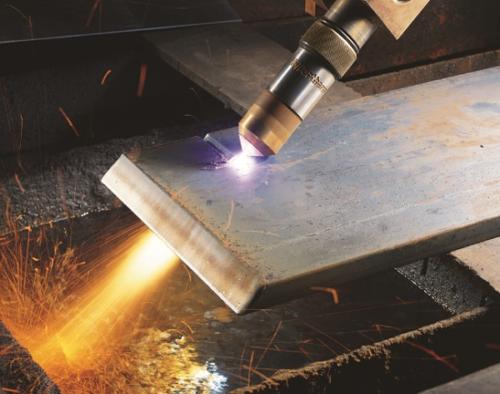 A plasma torch can be used to cut metal. Image credit: “Hypertherm”/Wikimedia Commons

In addition to stars, plasmas are found in some other high-temperature environments (both natural and man-made), such as lightning strikes, certain television screens, and specialized analytical instruments used to detect trace amounts of metals.

In a tiny cell in a plasma television, the plasma emits ultraviolet light, which in turn causes the display at that location to appear a specific color. The composite of these tiny dots of color makes up the image that you see. you can watch the video below by Emerald Robinson to learn more about plasma and the places you encounter it.

Matter can also have properties of more than one state when it is a mixture, such as with clouds. Clouds appear to behave somewhat like gases, but they are actually mixtures of air (gas) and tiny particles of water (liquid or solid).