Chemistry and the Scientific Method

Chemistry is a science based on observation and experimentation. Doing chemistry involves attempting to answer questions and explain observations in terms of the laws and theories of chemistry, using procedures that are accepted by the scientific community.

There is no single route to answering a question or explaining an observation. Nevertheless, there is an aspect common to every approach. Each uses knowledge based on experiments that can be reproduced to verify the results.

Some routes involve a hypothesis, a tentative explanation of observations that acts as a guide for gathering and checking information. We test a hypothesis by experimentation, calculation, and/or comparison with the experiments of others and then refine it as needed.

Some hypotheses are attempts to explain the behavior that is summarized in laws. The laws of science summarize a vast number of experimental observations, and describe or predict some facet of the natural world. If such a hypothesis turns out to be capable of explaining a large body of experimental data, it can reach the status of a theory.

Scientific theories are well-substantiated, comprehensive, testable explanations of particular aspects of nature. Theories are accepted because they provide satisfactory explanations, but they can be modified if new data become available. 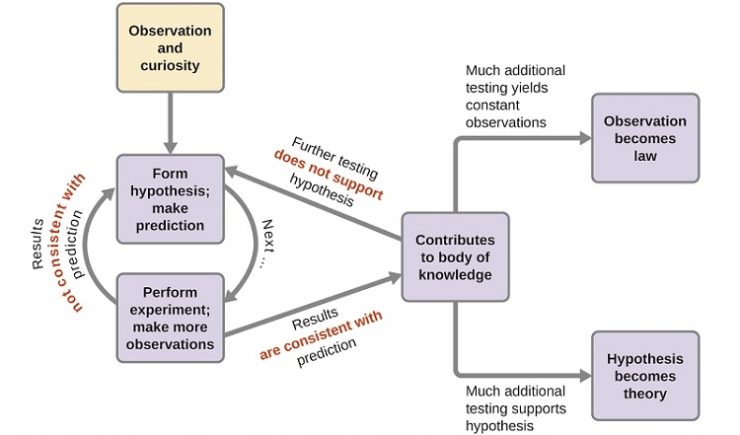 The scientific method follows a process similar to the one shown in this diagram. All the key components are shown, in roughly the right order. Scientific progress is seldom neat and clean: It requires open inquiry and the reworking of questions and ideas in response to findings. Image credit: OpenStax, Chemistry

The path of discovery that leads from question and observation to law or hypothesis to theory, combined with experimental verification of the hypothesis and any necessary modification of the theory, is called the scientific method (see image above).