In this lesson and the next few, we will be looking at how we classify chemical reactions. By the end of these lessons, you should be able to:

Humans interact with one another in various and complex ways, and we classify these interactions according to common patterns of behavior. When two humans exchange information, we say they are communicating. When they exchange blows with their fists or feet, we say they are fighting.

Faced with a wide range of varied interactions between chemical substances, scientists have likewise found it convenient (or even necessary) to classify chemical interactions by identifying common patterns of reactivity. This lesson and the next few will provide an introduction to three of the most prevalent types of chemical reactions: precipitation, acid-base, and oxidation-reduction.

A precipitation reaction is one in which dissolved substances react to form one (or more) solid products. Many reactions of this type involve the exchange of ions between ionic compounds in aqueous solution and are sometimes referred to as double displacement, double replacement, or metathesis reactions.

These reactions are common in nature and are responsible for the formation of coral reefs in ocean waters and kidney stones in animals. They are used widely in industry for production of a number of commodity and specialty chemicals. Precipitation reactions also play a central role in many chemical analysis techniques, including spot tests used to identify metal ions and gravimetric methods for determining the composition of matter (see Chemistry 101).

The extent to which a substance may be dissolved in water, or any solvent, is quantitatively expressed as its solubility, defined as the maximum concentration of a substance that can be achieved under specified conditions. Substances with relatively large solubilities are said to be soluble.

A substance will precipitate when solution conditions are such that its concentration exceeds its solubility. Substances with relatively low solubilities are said to be insoluble, and these are the substances that readily precipitate from solution.

More information on these important concepts is provided in a later tutorial that covers solutions. For purposes of predicting the identities of solids formed by precipitation reactions, one may simply refer to patterns of solubility that have been observed for many ionic compounds (see table below).

A vivid example of precipitation is observed when solutions of potassium iodide and lead nitrate are mixed, resulting in the formation of solid lead iodide:

This observation is consistent with the solubility guidelines: The only insoluble compound among all those involved is lead iodide, one of the exceptions to the general solubility of iodide salts.

The net ionic equation representing this reaction is:

Lead iodide is a bright yellow solid that was formerly used as an artist’s pigment known as iodine yellow (see image below). The properties of pure PbI2 crystals make them useful for fabrication of X-ray and gamma ray detectors. 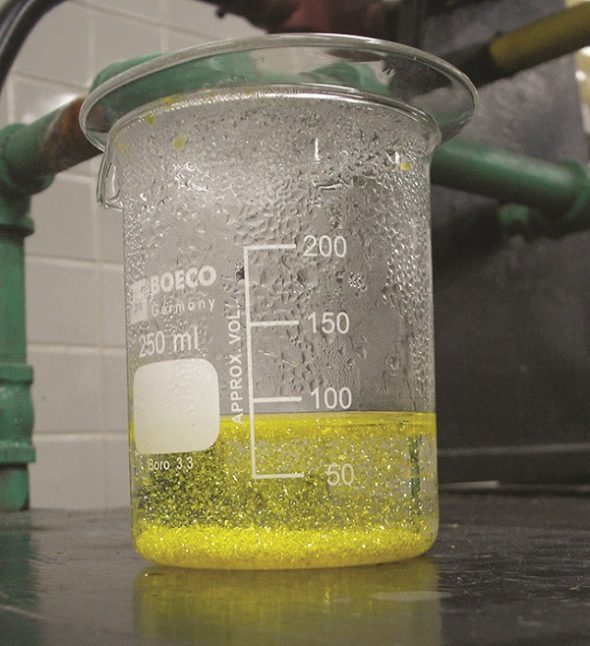 A precipitate of PbI2 forms when solutions containing Pb2+ and I− are mixed. Image credit: Der Kreole/Wikimedia Commons

The solubility guidelines in the table above may be used to predict whether a precipitation reaction will occur when solutions of soluble ionic compounds are mixed together. One merely needs to identify all the ions present in the solution and then consider if possible cation/anion pairing could result in an insoluble compound.

The solubility guidelines indicate all nitrate salts are soluble but that AgF is one of the exceptions to the general solubility of fluoride salts. A precipitation reaction, therefore, is predicted to occur, as described by the following equations: