Liquid water is crucial to life as we know it. The formation of hydrogen bonds is an important quality of liquid water. As water molecules make hydrogen bonds with each other, water takes on some unique chemical characteristics compared to other liquids. Since living things have a high water content, understanding these chemical features is key to understanding life. 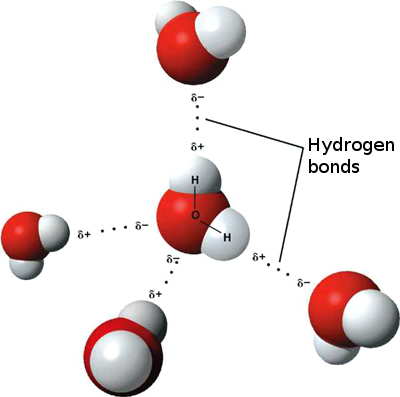 On the other hand, when the temperature of water is reduced and water freezes, the water molecules form a crystalline structure maintained by hydrogen bonding (there is not enough energy to break the hydrogen bonds) that makes ice less dense than liquid water, a phenomenon not seen in the solidification of other liquids.

Water’s lower density in its solid form is due to the orientation of hydrogen bonds as it freezes. The water molecules are farther apart when compared to liquid water. With most other liquids, solidification when the temperature drops includes the lowering of kinetic energy between molecules, allowing them to pack even more tightly than in liquid form and giving the solid a greater density than the liquid.

Hydrogen bonding makes ice less dense than liquid water. The (a) lattice structure of ice makes it less dense than the freely flowing molecules of liquid water, enabling it to (b) float on water. Image Attribution: (a) modification of work by Jane Whitney, image created using Visual Molecular Dynamics (VMD) software1; (b) modification of work by Carlos Ponte

The lower density of ice, illustrated and pictured above, is an anomaly (that is, it deviates from the normal). In fact, this anomaly causes ice to float at the surface of liquid water, such as in an iceberg or ice cubes in a glass of water. In lakes and ponds, ice will form on the surface of the water creating an insulating barrier that protects the animals and plant life in the pond from freezing. Without this layer of insulating ice, plants and animals living in the pond would freeze in the solid block of ice and could not survive.

The expansion of ice relative to liquid water causes the detrimental effect of freezing on living organisms. The ice crystals that form upon freezing rupture the delicate membranes essential for the function of living cells. This irreversibly damages the cells. Cells can only survive freezing if the water in them is temporarily replaced by another liquid like glycerol.

The structure of ice crystal has hexagonal shape with oxygen atoms arranged in a tetrahedral lattice. Each molecule of water is bound to its neighbor by means of hydrogen bonds. During classical molecular dynamics simulation, the molecules begin to move out of their initial positions within the crystal lattice, tearing the hydrogen bonds (melting process). Dr. S. Shityakov of Würzburg University prepared the animated movie below.