The Bohr model is useful in explaining the reactivity and chemical bonding of many elements. However, it doesn’t give a very accurate description of the distribution of electrons in space around the nucleus. Electrons do not circle the nucleus like the earth orbits the sun. Instead, they are found in electron orbitals.

What is an orbital?

These relatively complex shapes result from the fact that electrons behave not just like particles, but also like waves. Mathematical equations from quantum mechanics known as wave functions can predict within a certain level of probability where an electron might be at any given time. The area where an electron is most likely to be found is called its orbital. 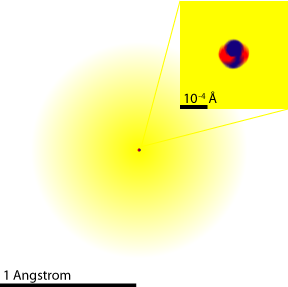 A semi-accurate depiction of the helium atom. The darkness of the electron cloud corresponds to the line-of-sight integral over the probability function of the 1s electron orbital. The magnified nucleus is schematic, showing protons in red and neutrons in blue. In reality, the nucleus is also spherically symmetric. Image Attribution: “Bensaccount”/Wikimedia Commons (public domain)

Electron cloud is an informal term physicists also use. They use it to describe where electrons are when they go around the nucleus of an atom. The electron cloud model is different from the older Bohr atomic model by Niels Bohr. Bohr talked about electrons orbiting the nucleus. But, explaining the behavior of these electron “orbits” was a key issue in the development of quantum mechanics.

In quantum mechanics, an atomic orbital is a mathematical function that describes the wave-like behavior of either one electron or a pair of electrons in an atom. This function can be used to calculate the probability of finding any electron of an atom in any specific region around the atom’s nucleus. We will continue looking at electron orbitals in the next lesson.