By the end of this lesson and the next few, you should be able to

Introducing the Chemistry of Life

Elements in various combinations comprise all matter, including living things. Some of the most abundant elements in living organisms include carbon, hydrogen, nitrogen, oxygen, sulfur, and phosphorus. In fact, these form the nucleic acids, proteins, carbohydrates, and lipids that are the fundamental components of living matter.

Biologists must understand these important building blocks. They must also understand the unique structures of the atoms that make up molecules, allowing for the formation of cells, tissues, organ systems, and entire organisms. 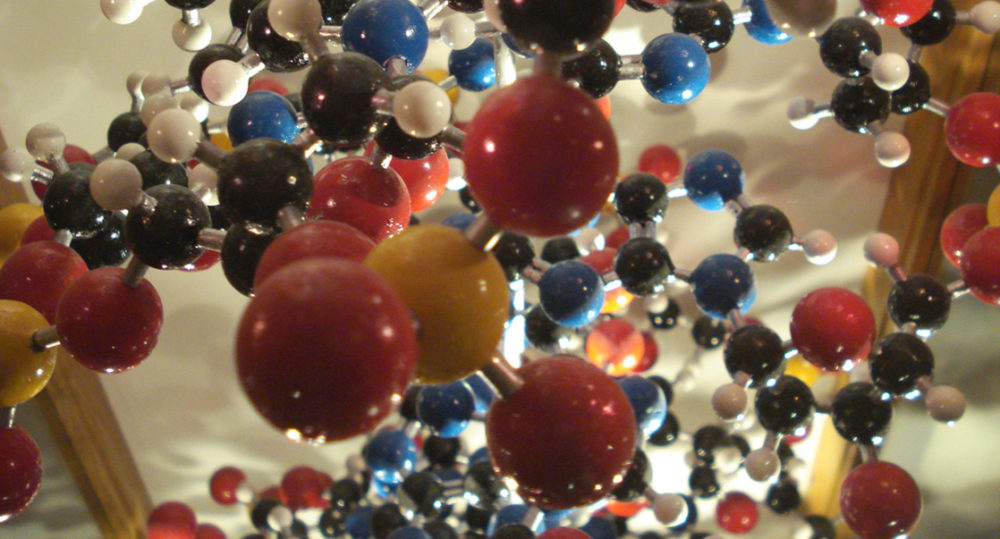 Atoms are the building blocks of molecules found in the universe. These include air, soil, water, rocks… and also the cells of all living organisms. In this model of an organic molecule, the atoms of carbon (black), hydrogen (white), nitrogen (blue), oxygen (red), and sulfur (yellow) are in proportional atomic size. The silver rods indicate chemical bonds. Image Attribution: Modification of work by Christian Guthier

All biological processes follow the laws of physics and chemistry. So in order to understand how biological systems work, it is important to understand the underlying physics and chemistry. For example, the flow of blood within the circulatory system follows the laws of physics that regulate the modes of fluid flow. The breakdown of the large, complex molecules of food into smaller molecules—and the conversion of these to release energy to be stored in adenosine triphosphate (ATP)—is a series of chemical reactions that follow chemical laws.

The properties of water and the formation of hydrogen bonds are key to understanding living processes. Recognizing the properties of acids and bases is important, for example, to our understanding of the digestive process. Therefore, the fundamentals of physics and chemistry are important for gaining insight into biological processes. In the lessons that follow, we will explore the chemistry of life.