The cell membrane, also called the plasma membrane or plasmalemma, is a semipermeable lipid bilayer common to all living cells. It contains a variety of biological molecules, primarily proteins and lipids, which are involved in a vast array of cellular processes. It also serves as the attachment point for both the intracellular cytoskeleton and, if present, the cell wall. Image Attribution: Mariana Ruiz / Wikimedia Commons (public domain)

Mosaic Characteristic of the Membrane

The mosaic characteristic of the membrane, described in the fluid mosaic model, helps to illustrate its nature. The integral proteins and lipids exist in the membrane as separate but loosely attached molecules. These resemble the separate, multicolored tiles of a mosaic picture, and they float, moving somewhat with respect to one another.

The membrane is not like a balloon, however, that can expand and contract. Rather, it is fairly rigid and can burst if penetrated or if a cell takes in too much water. However, because of its mosaic nature, a very fine needle can easily penetrate a plasma membrane without causing it to burst, and the membrane will flow and self-seal when the needle is extracted.

The mosaic characteristics of the membrane explain some but not all of its fluidity. In fact, there are two other factors that help maintain this fluid characteristic. One factor is the nature of the phospholipids themselves. In their saturated form, the fatty acids in phospholipid tails are saturated with bound hydrogen atoms. There are no double bonds between adjacent carbon atoms. This results in tails that are relatively straight. 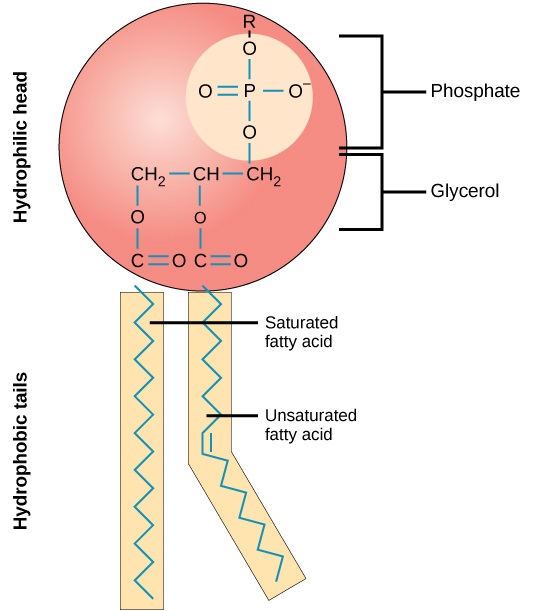 In contrast, unsaturated fatty acids do not contain a maximal number of hydrogen atoms. Nevertheless, they do contain some double bonds between adjacent carbon atoms. A double bond results in a bend in the string of carbons of approximately 30 degrees (see image above). Thus, if saturated fatty acids, with their straight tails, are compressed by decreasing temperatures, they press in on each other, making a dense and fairly rigid membrane.

Finally, animals have an additional membrane constituent that assists in maintaining fluidity. Cholesterol, which lies alongside the phospholipids in the membrane, tends to dampen the effects of temperature on the membrane. Thus, this lipid functions as a buffer, preventing lower temperatures from inhibiting fluidity and preventing increased temperatures from increasing fluidity too much. Thus, cholesterol extends, in both directions, the range of temperature in which the membrane is appropriately fluid and consequently functional. Cholesterol also serves other functions, such as organizing clusters of transmembrane proteins into lipid rafts.

This video by Stanford University demonstrates the fluidity of the plasma membrane with a neuronal cell.