Regulator Molecules of the Cell Cycle

Regulator Molecules of the Cell Cycle

In addition to the internally controlled checkpoints, there are two groups of intracellular molecules that regulate the cell cycle. These regulatory molecules either promote progress of the cell to the next phase (positive regulation) or halt the cycle (negative regulation).

Regulator molecules may act individually, or they can influence the activity or production of other regulatory proteins. Therefore, the failure of a single regulator may have almost no effect on the cell cycle, especially if more than one mechanism controls the same event. Conversely, the effect of a deficient or non-functioning regulator can be wide-ranging and possibly fatal to the cell if multiple processes are affected.

Positive Regulation of the Cell Cycle

Two groups of proteins, called cyclins and cyclin-dependent kinases (Cdks), are responsible for the progress of the cell through the various checkpoints. The levels of the four cyclin proteins fluctuate throughout the cell cycle in a predictable pattern (see the figure below). Increases in the concentration of cyclin proteins are triggered by both external and internal signals. After the cell moves to the next stage of the cell cycle, the cyclins that were active in the previous stage are degraded. 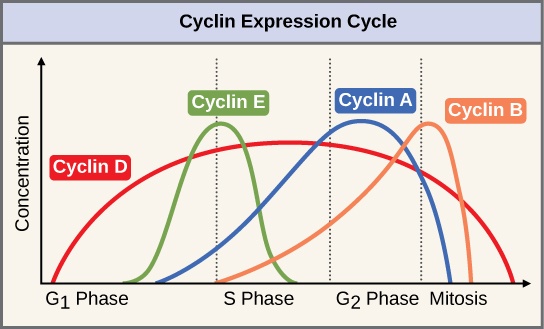 The concentrations of cyclin proteins change throughout the cell cycle. There is a direct correlation between cyclin accumulation and the three major cell cycle checkpoints. Also note the sharp decline of cyclin levels following each checkpoint (the transition between phases of the cell cycle), as cyclin is degraded by cytoplasmic enzymes. (credit: modification of work by “WikiMiMa”/Wikimedia Commons)

Cyclins regulate the cell cycle only when they are tightly bound to Cdks. To be fully active, the Cdk/cyclin complex must also be phosphorylated in specific locations. Like all kinases, Cdks are enzymes (kinases) that phosphorylate other proteins. Phosphorylation activates the protein by changing its shape. The proteins phosphorylated by Cdks are involved in advancing the cell to the next phase. (See the figure below).

The levels of Cdk proteins are relatively stable throughout the cell cycle; however, the concentrations of cyclin fluctuate and determine when Cdk/cyclin complexes form. The different cyclins and Cdks bind at specific points in the cell cycle and thus regulate different checkpoints. 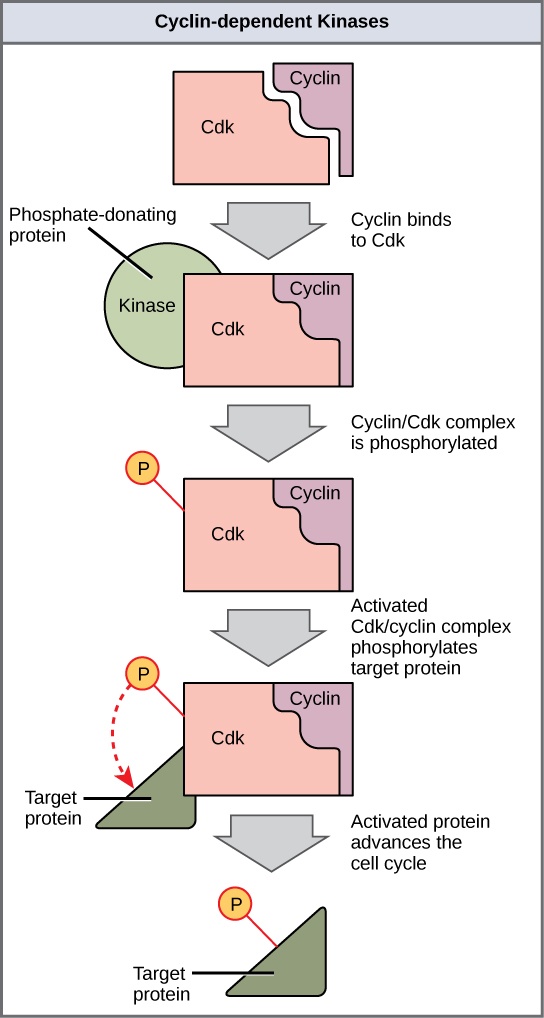 Since the cyclic fluctuations of cyclin levels are based on the timing of the cell cycle and not on specific events, regulation of the cell cycle usually occurs by either the Cdk molecules alone or the Cdk/cyclin complexes. Without a specific concentration of fully activated cyclin/Cdk complexes, the cell cycle cannot proceed through the checkpoints.

Although the cyclins are the main regulatory molecules that determine the forward momentum of the cell cycle, there are several other mechanisms that fine-tune the progress of the cycle with negative, rather than positive, effects. These mechanisms essentially block the progression of the cell cycle until problematic conditions are resolved.

Negative Regulation of the Cell Cycle

The best understood negative regulatory molecules are retinoblastoma protein (Rb), p53, and p21. Retinoblastoma proteins are a group of tumor-suppressor proteins common in many cells. The 53 and 21 designations refer to the functional molecular masses of the proteins (p) in kilodaltons.

Rb, p53, and p21 act primarily at the G1 checkpoint. p53 is a multi-functional protein that has a major impact on the commitment of a cell to division because it acts when there is damaged DNA in cells that are undergoing the preparatory processes during G1. If damaged DNA is detected, p53 halts the cell cycle and recruits enzymes to repair the DNA. If the DNA cannot be repaired, p53 can trigger apoptosis, or cell suicide, to prevent the duplication of damaged chromosomes.

As p53 levels rise, the production of p21 is triggered. p21 enforces the halt in the cycle dictated by p53 by binding to and inhibiting the activity of the Cdk/cyclin complexes. As a cell is exposed to more stress, higher levels of p53 and p21 accumulate, making it less likely that the cell will move into the S phase.

Rb exerts its regulatory influence on other positive regulator proteins. Chiefly, Rb monitors cell size. In the active, dephosphorylated state, Rb binds to proteins called transcription factors, most commonly, E2F (see the figure below). Transcription factors “turn on” specific genes, allowing the production of proteins encoded by that gene. When Rb is bound to E2F, production of proteins necessary for the G1/S transition is blocked. 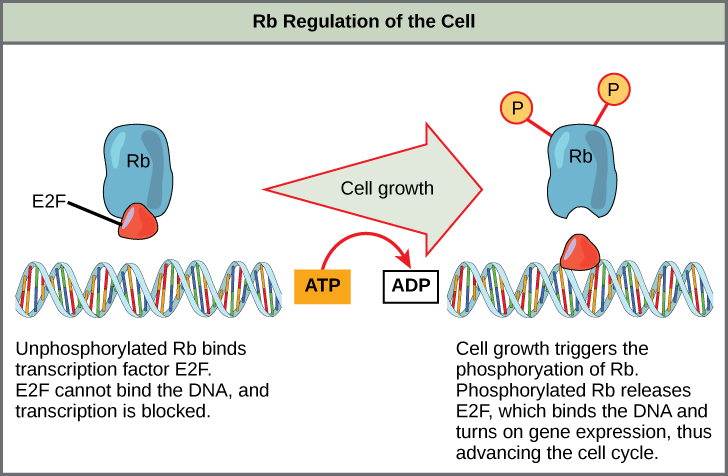 Rb halts the cell cycle and releases its hold in response to cell growth.

Rb and other proteins that negatively regulate the cell cycle are sometimes called tumor suppressors. Why do you think the name tumor suppressor might be appropriate for these proteins?

Rb and other negative regulatory proteins control cell division and therefore prevent the formation of tumors. Mutations that prevent these proteins from carrying out their function can result in cancer.