It is essential that the daughter cells produced be exact duplicates of the parent cell. Mistakes in the duplication or distribution of the chromosomes lead to mutations that may be passed forward to every new cell produced from an abnormal cell. To prevent a compromised cell from continuing to divide, there are internal control mechanisms that operate at three main cell cycle checkpoints. A checkpoint is one of several points in the eukaryotic cell cycle at which the progression of a cell to the next stage in the cycle can be halted until conditions are favorable. These checkpoints occur near the end of G1, at the G2/M transition, and during metaphase (see the figure below). 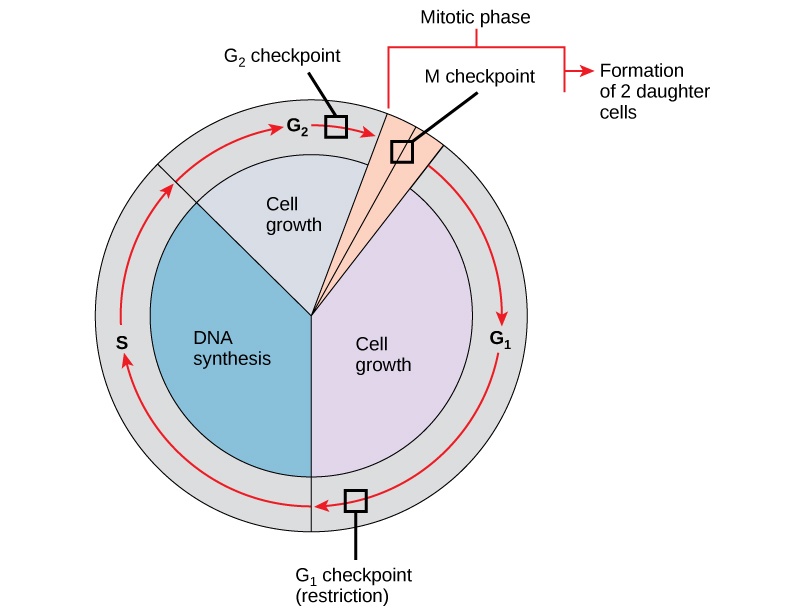 The G1 checkpoint determines whether all conditions are favorable for cell division to proceed. The G1 checkpoint, also called the restriction point (in yeast), is a point at which the cell irreversibly commits to the cell division process. External influences, such as growth factors, play a large role in carrying the cell past the G1 checkpoint. In addition to adequate reserves and cell size, there is a check for genomic DNA damage at the G1 checkpoint. A cell that does not meet all the requirements will not be allowed to progress into the S phase. The cell can halt the cycle and attempt to remedy the problematic condition, or the cell can advance into G0 and await further signals when conditions improve.

The G2 checkpoint bars entry into the mitotic phase if certain conditions are not met. As at the G1 checkpoint, cell size and protein reserves are assessed. However, the most important role of the G2 checkpoint is to ensure that all of the chromosomes have been replicated and that the replicated DNA is not damaged. If the checkpoint mechanisms detect problems with the DNA, the cell cycle is halted, and the cell attempts to either complete DNA replication or repair the damaged DNA.

Watch what occurs at the G1, G2, and M checkpoints by downloading this animation of the cell cycle.