If the DNA from all 46 chromosomes in a human cell nucleus was laid out end to end, it would measure approximately two meters; however, its diameter would be only 2 nm. Considering that the size of a typical human cell is about 10 µm (100,000 cells lined up to equal one meter), DNA must be tightly packaged to fit in the cell’s nucleus. At the same time, it must also be readily accessible for the genes to be expressed. During some stages of the cell cycle, the long strands of DNA are condensed into compact chromosomes. There are a number of ways that chromosomes are compacted. 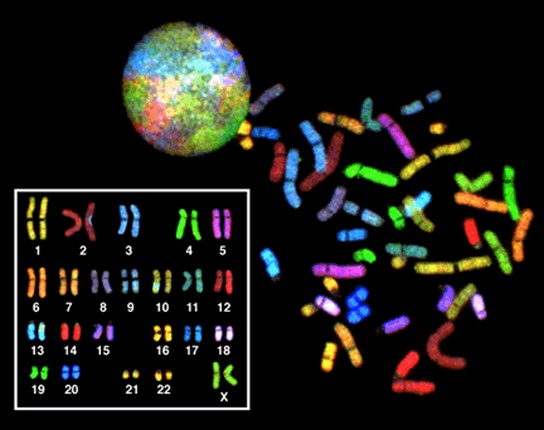 There are 23 pairs of homologous chromosomes in a female human somatic cell. The condensed chromosomes are viewed within the nucleus (top), removed from a cell in mitosis and spread out on a slide (right), and artificially arranged according to length (left); an arrangement like this is called a karyotype. In this image, the chromosomes were exposed to fluorescent stains for differentiation of the different chromosomes. A method of staining called “chromosome painting” employs fluorescent dyes that highlight chromosomes in different colors. (credit: National Human Genome Project/NIH)

In the first level of compaction, short stretches of the DNA double helix wrap around a core of eight histone proteins at regular intervals along the entire length of the chromosome (see the figure below). The DNA-histone complex is called chromatin. The beadlike, histone DNA complex is called a nucleosome, and DNA connecting the nucleosomes is called linker DNA. A DNA molecule in this form is about seven times shorter than the double helix without the histones, and the beads are about 10 nm in diameter, in contrast with the 2-nm diameter of a DNA double helix.

The next level of compaction occurs as the nucleosomes and the linker DNA between them are coiled into a 30-nm chromatin fiber. This coiling further shortens the chromosome so that it is now about 50 times shorter than the extended form. In the third level of packing, a variety of fibrous proteins is used to pack the chromatin. These fibrous proteins also ensure that each chromosome in a non-dividing cell occupies a particular area of the nucleus that does not overlap with that of any other chromosome (see the top image from the previous lesson). 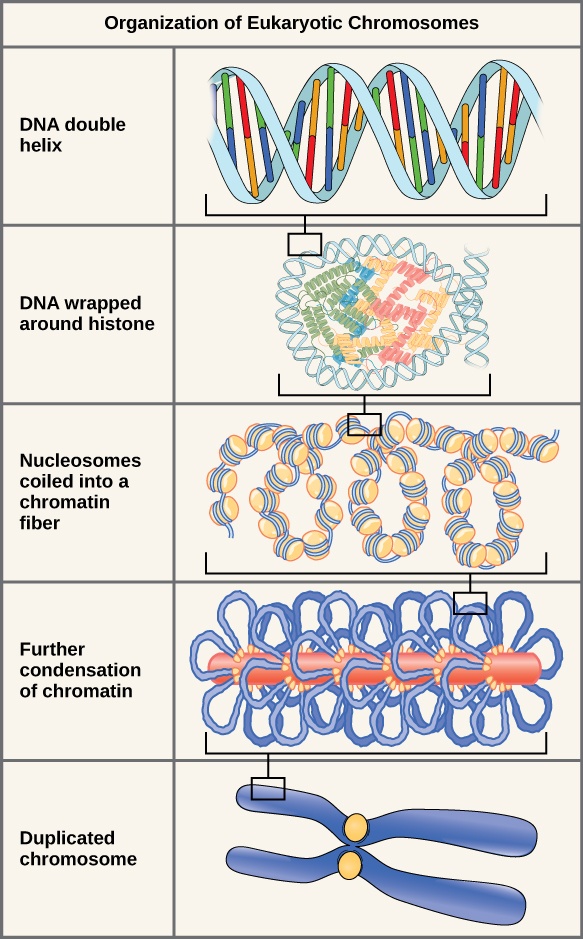 Double-stranded DNA wraps around histone proteins to form nucleosomes that have the appearance of “beads on a string.” The nucleosomes are coiled into a 30-nm chromatin fiber. When a cell undergoes mitosis, the chromosomes condense even further.

Optional Video: How DNA is Packaged

This animation illustrates the different levels of chromosome packing.