Biological organisms are open systems. Energy is exchanged between them and their surroundings, as they consume energy-storing molecules and release energy to the environment by doing work. Like all things in the physical world, energy is subject to the laws of physics. The laws of thermodynamics govern the transfer of energy in and among all systems in the universe.

The First Law of Thermodynamics

According to the first law of thermodynamics, energy may be transferred from place to place or transformed into different forms, but it cannot be created or destroyed. As a matter of fact, the transfers and transformations of energy take place around us all the time. Light bulbs transform electrical energy into light energy. Gas stoves transform chemical energy from natural gas into heat energy. Similarly, plants perform one of the most biologically useful energy transformations on earth: that of converting the energy of sunlight into the chemical energy stored within organic molecules. You can see some examples of energy transformations in the image below. 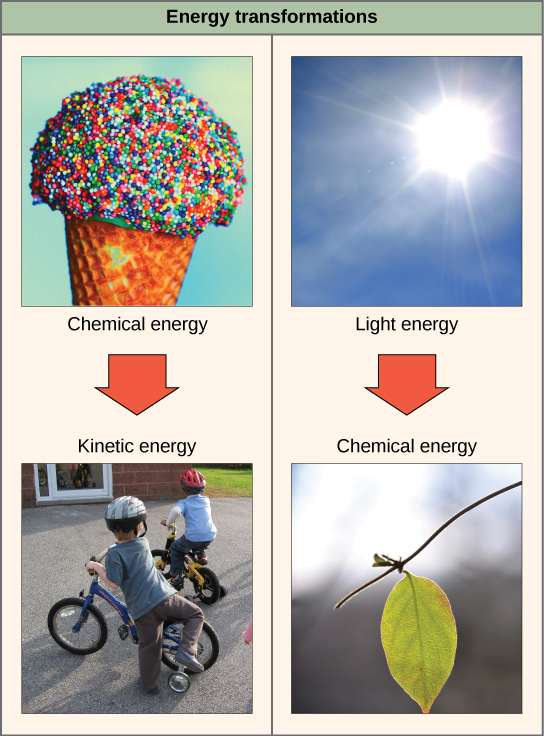 The challenge for all living organisms is to obtain energy from their surroundings in forms that they can transfer or transform into usable energy to do work. However, living cells have evolved to meet this challenge very well. Chemical energy stored within organic molecules such as sugars and fats is transformed through a series of cellular chemical reactions into energy within molecules of ATP.

Energy in ATP molecules is easily accessible to do work. Examples of the types of work that cells need to do include building complex molecules, transporting materials, powering the beating motion of cilia or flagella, contracting muscle fibers to create movement, and reproduction.