Control of Metabolism Through Enzyme Regulation

It would seem ideal to have a scenario in which all of the enzymes encoded in an organism’s genome existed in abundant supply and functioned optimally under all cellular conditions, in all cells, at all times. In reality, this is far from the case. A variety of mechanisms ensure that this does not happen.

Cellular needs and conditions vary from cell to cell, and change within individual cells over time. The required enzymes and energetic demands of stomach cells are different from those of fat storage cells, skin cells, blood cells, and nerve cells. Furthermore, a digestive cell works much harder to process and break down nutrients during the time that closely follows a meal compared with many hours after a meal. As these cellular demands and conditions vary, so do the amounts and functionality of different enzymes.

In certain cellular environments, enzyme activity is partly controlled by environmental factors, like pH and temperature. There are other mechanisms through which cells control the activity of enzymes and determine the rates at which various biochemical reactions will occur.

Regulation of Enzymes by Molecules

Enzymes can be regulated in ways that either promote or reduce their activity. There are many different kinds of molecules that inhibit or promote enzyme function, and various mechanisms exist for doing so. In some cases of enzyme inhibition, for example, an inhibitor molecule is similar enough to a substrate that it can bind to the active site and simply block the substrate from binding.

When this happens, the enzyme is inhibited through competitive inhibition, because an inhibitor molecule competes with the substrate for active site binding (see image below). 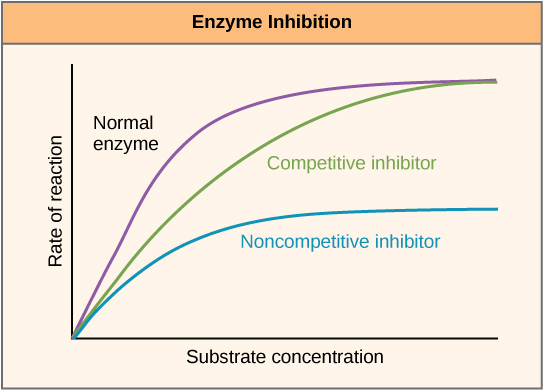 On the other hand, in noncompetitive inhibition, an inhibitor molecule binds to the enzyme in a location other than an allosteric site and still manages to block substrate binding to the active site.

Some inhibitor molecules bind to enzymes in a location where their binding induces a conformational change that reduces the affinity of the enzyme for its substrate. This type of inhibition is called allosteric inhibition (see image below). 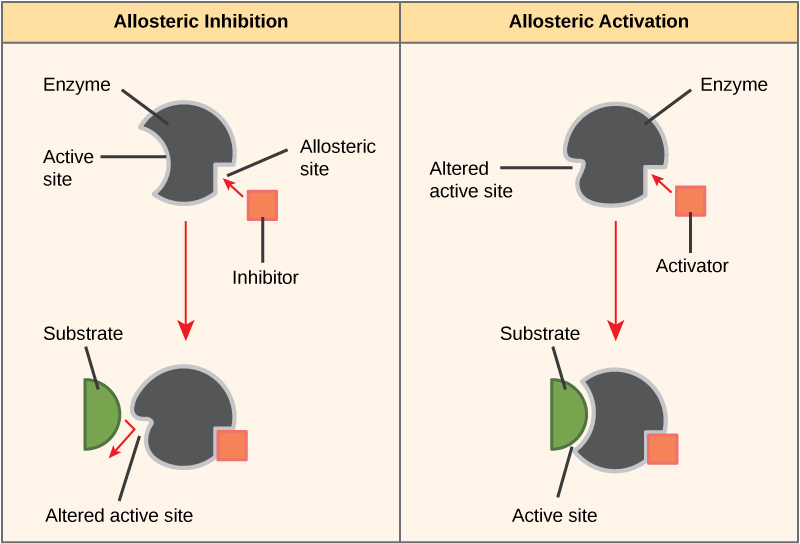 Most allosterically regulated enzymes are made up of more than one polypeptide. This means that they have more than one protein subunit. When an allosteric inhibitor binds to an enzyme, all active sites on the protein subunits are changed slightly such that they bind their substrates with less efficiency. There are allosteric activators as well as inhibitors. Allosteric activators bind to locations on an enzyme away from the active site. This induces a conformational change that increases the affinity of the enzyme’s active site(s) for its substrate(s).

Many enzymes don’t work optimally, or even at all, unless bound to other specific non-protein helper molecules. This binding might be either temporarily through ionic or hydrogen bonds or permanently through stronger covalent bonds. Two types of helper molecules are cofactors and coenzymes. Binding to these molecules promotes optimal conformation and function for their respective enzymes.

Cofactors are inorganic ions such as iron (Fe++) and magnesium (Mg++). One example of an enzyme that requires a metal ion as a cofactor is the enzyme that builds DNA molecules, DNA polymerase, which requires bound zinc ion (Zn++) to function. Coenzymes are organic helper molecules. They have a basic atomic structure made up of carbon and hydrogen, which are required for enzyme action. The most common sources of coenzymes are dietary vitamins (see image below). 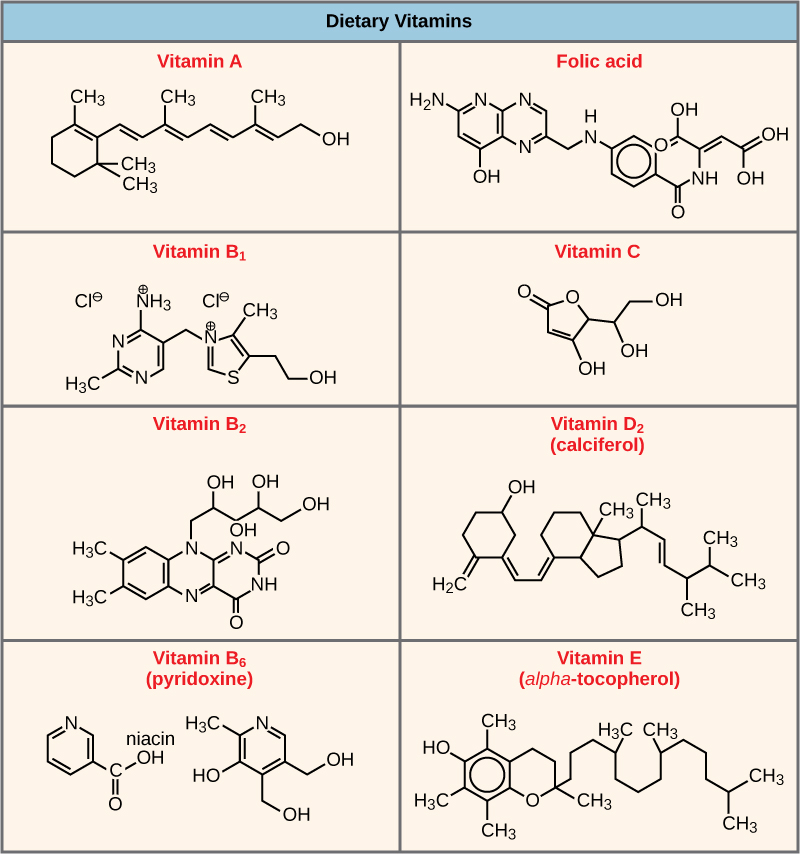 Vitamins are important coenzymes or precursors of coenzymes, and are required for enzymes to function properly. Multivitamin capsules usually contain mixtures of all the vitamins at different percentages. Image credit: OpenStax Biology

Some vitamins are precursors to coenzymes and others act directly as coenzymes. Vitamin C is a coenzyme for multiple enzymes that take part in building the important connective tissue component, collagen. An important step in the breakdown of glucose to yield energy is catalysis by a multi-enzyme complex called pyruvate dehydrogenase.

Pyruvate dehydrogenase is a complex of several enzymes that actually requires one cofactor (a magnesium ion) and five different organic coenzymes to catalyze its specific chemical reaction. Therefore, enzyme function is, in part, regulated by an abundance of various cofactors and coenzymes. These are supplied primarily by the diets of most organisms.