If energy is released during a chemical reaction, then the resulting value from the above equation will be a negative number. In other words, reactions that release energy have a ∆G < 0. A negative ∆G also means that the products of the reaction have less free energy than the reactants, because they gave off some free energy during the reaction.

Reactions that have a negative ∆G and consequently release free energy are called exergonic reactions. Think: exergonic means energy is exiting the system. These reactions are also referred to as spontaneous reactions, because they can occur without the addition of energy into the system.

Understanding which chemical reactions are spontaneous and release free energy is extremely useful for biologists, because these reactions can be harnessed to perform work inside the cell. An important distinction must be drawn between the term spontaneous and the idea of a chemical reaction that occurs immediately. Contrary to the everyday use of the term, a spontaneous reaction is not one that suddenly or quickly occurs. The rusting of iron is an example of a spontaneous reaction that occurs slowly, little by little, over time.

If a chemical reaction requires an input of energy rather than releasing energy, then the ∆G for that reaction will be a positive value. In this case, the products have more free energy than the reactants. Thus, we can think of the products of these reactions as energy-storing molecules. These chemical reactions are what we refer to as endergonic reactions, and they are non-spontaneous. An endergonic reaction will not take place on its own without the addition of free energy.

Let’s revisit the example of the synthesis and breakdown of the food molecule, glucose. Remember that the building of complex molecules, such as sugars, from simpler ones is an anabolic process and requires energy. Therefore, the chemical reactions involved in anabolic processes are endergonic reactions.

On the other hand, the catabolic process of breaking sugar down into simpler molecules releases energy in a series of exergonic reactions. Like the example of rust above, the breakdown of sugar involves spontaneous reactions, but these reactions don’t occur instantaneously. The image below shows some other examples of endergonic and exergonic reactions. Later lessons will provide more information about what else is required to make even spontaneous reactions happen more efficiently. 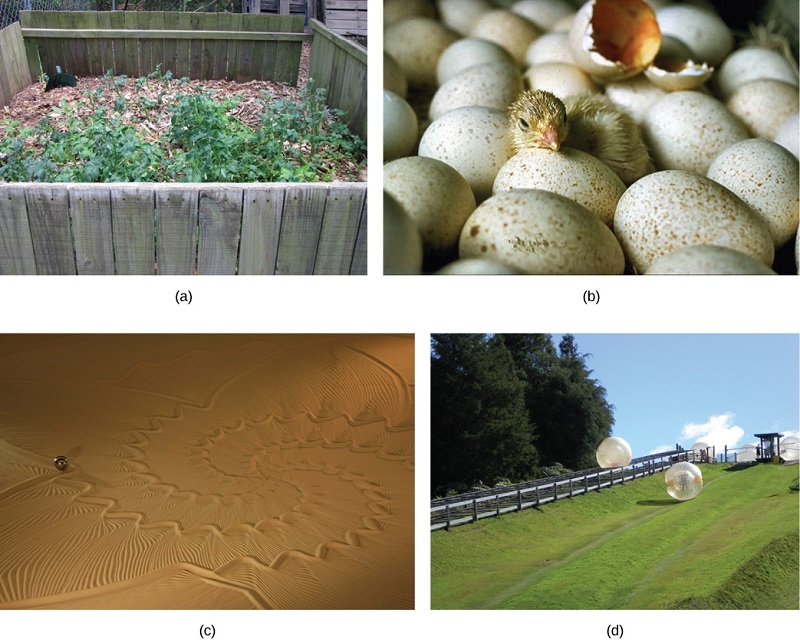 Look at each of the processes in the image above, and try to think if it is endergonic or exergonic. In each case, do you think the enthalpy increases or decreases? What about entropy? Does it increase or decrease?

An important concept in the study of metabolism and energy is that of chemical equilibrium. Most chemical reactions are reversible. They can proceed in both directions, releasing energy into their environment in one direction, and absorbing it from the environment in the other direction (see image below).

The same is true for the chemical reactions involved in cell metabolism, such as the breaking down and building up of proteins into and from individual amino acids, respectively. Reactants within a closed system will undergo chemical reactions in both directions until a state of equilibrium is reached. This state of equilibrium is one of the lowest possible free energy and a state of maximal entropy.

Energy must be put into the system to push the reactants and products away from a state of equilibrium. Either reactants or products must be added, removed, or changed. If a cell were a closed system, its chemical reactions would reach equilibrium, and it would die because there would be insufficient free energy left to perform the work needed to maintain life.

In a living cell, chemical reactions are constantly moving towards equilibrium, but never reach it. This is because a living cell is an open system. Materials pass in and out, the cell recycles the products of certain chemical reactions into other reactions, and chemical equilibrium is never reached. In this way, living organisms are in a constant energy-requiring, uphill battle against equilibrium and entropy. This constant supply of energy ultimately comes from sunlight, which is used to produce nutrients in the process of photosynthesis.

When molecules collide, chemical reactions can occur. This causes major structural changes akin to getting a new arm on your face. In this TED-Ed video, George Zaidan and Charles Morton playfully imagine chemical systems as busy city streets, and the colliding molecules within them as your average, limb-swapping joes.