What is activation energy?

There is another important concept that must be considered regarding endergonic and exergonic reactions. Even exergonic reactions require a small amount of energy input to get going before they can proceed with their energy-releasing steps. These reactions have a net release of energy, but still require some energy in the beginning. This small amount of energy input necessary for all chemical reactions to occur is called the activation energy (or free energy of activation) and is abbreviated EA (see image below). 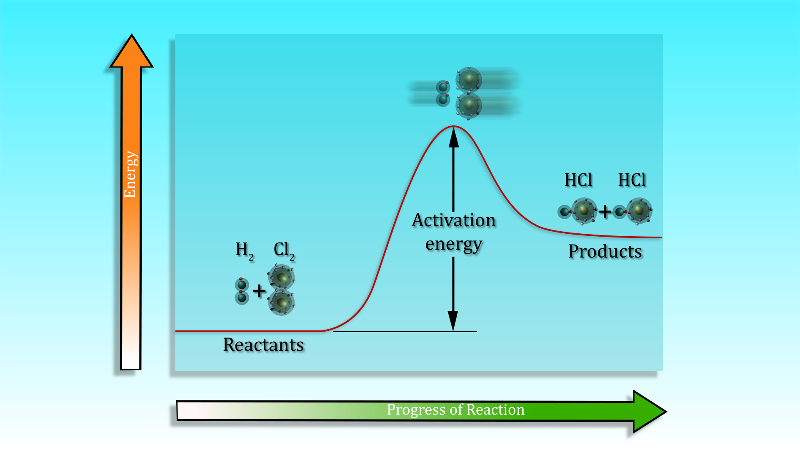 Why would an energy-releasing reaction still need energy to begin?

Why would an energy-releasing, negative ∆G reaction actually require some energy to proceed? The reason lies in the steps that take place during a chemical reaction. During chemical reactions, certain chemical bonds are broken and new ones are formed. For example, when a glucose molecule is broken down, bonds between the carbon atoms of the molecule are broken. Since these are energy-storing bonds, they release energy when broken.

However, to get them into a state that allows the bonds to break, the molecule must be somewhat contorted. A small energy input is required to achieve this contorted state. This contorted state is called the transition state, and it is a high-energy, unstable state. For this reason, reactant molecules don’t last long in their transition state. But they very quickly proceed to the next steps of the chemical reaction.

Free energy diagrams illustrate the energy profiles for a given reaction. Whether the reaction is exergonic or endergonic determines whether the products in the diagram will exist at a lower or higher energy state than both the reactants and the products. However, regardless of this measure, the transition state of the reaction exists at a higher energy state than the reactants, and thus, EA is always positive.

Where does activation energy come from?

Where does the activation energy required by chemical reactants come from? The source of the activation energy needed to push reactions forward is typically heat energy from the surroundings. Heat energy (the total bond energy of reactants or products in a chemical reaction) speeds up the motion of molecules, increasing the frequency and force with which they collide. It also moves atoms and bonds within the molecule slightly, helping them reach their transition state.

For this reason, heating up a system will cause chemical reactants within that system to react more frequently. Increasing the pressure on a system has the same effect. Once reactants have absorbed enough heat energy from their surroundings to reach the transition state, the reaction will proceed.

The activation energy of a particular reaction determines the rate at which it will proceed. The higher the activation energy, the slower the chemical reaction will be. The example of iron rusting illustrates an inherently slow reaction. This reaction occurs slowly over time because of its high EA.

Additionally, the burning of many fuels, which is strongly exergonic, will take place at a negligible rate unless their activation energy is overcome by sufficient heat from a spark. Once they begin to burn, however, the chemical reactions release enough heat to continue the burning process, supplying the activation energy for surrounding fuel molecules. 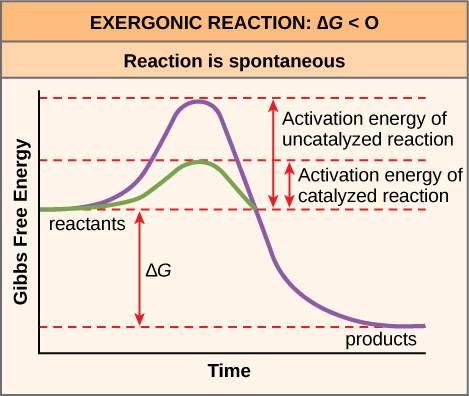 Activation energy is the energy required for a reaction to proceed, and it is lower if the reaction is catalyzed. The horizontal axis of this diagram describes the sequence of events in time. Image credit: OpenStax Biology

Like these reactions outside of cells, the activation energy for most cellular reactions is too high for heat energy to overcome at efficient rates. In other words, in order for important cellular reactions to occur at appreciable rates (number of reactions per unit time), their activation energies must be lowered (see image above). We refer to this process as catalysis. This is a very good thing as far as living cells are concerned. Important macromolecules, such as proteins, DNA, and RNA, store considerable energy, and their breakdown is exergonic. If cellular temperatures alone provided enough heat energy for these exergonic reactions to overcome their activation barriers, the essential components of a cell would disintegrate.

This 2-minute animation by RicochetScience explains how enzymes speed up chemical reactions by lowering the activation energy.