Receptors are protein molecules in the target cell or on its surface that bind ligand. There are two types of receptors, internal receptors and cell-surface receptors.

Internal receptors, also known as intracellular or cytoplasmic receptors, are found in the cytoplasm of the cell and respond to hydrophobic ligand molecules that are able to travel across the plasma membrane. Once inside the cell, many of these molecules bind to proteins that act as regulators of mRNA synthesis (transcription) to mediate gene expression.

Gene expression is the cellular process of transforming the information in a cell’s DNA into a sequence of amino acids, which ultimately forms a protein. When the ligand binds to the internal receptor, a conformational change is triggered that exposes a DNA-binding site on the protein. The ligand-receptor complex moves into the nucleus, then binds to specific regulatory regions of the chromosomal DNA and promotes the initiation of transcription (see the figure below).

Transcription is the process of copying the information in a cells DNA into a special form of RNA called messenger RNA (mRNA); the cell uses information in the mRNA (which moves out into the cytoplasm and associates with ribosomes) to link specific amino acids in the correct order, producing a protein. Internal receptors can directly influence gene expression without having to pass the signal on to other receptors or messengers. 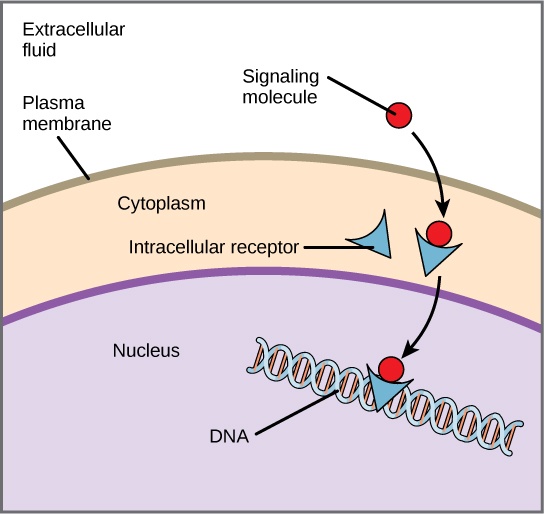 Because cell-surface receptor proteins are fundamental to normal cell functioning, it should come as no surprise that a malfunction in any one of these proteins could have severe consequences. Errors in the protein structures of certain receptor molecules have been shown to play a role in hypertension (high blood pressure), asthma, heart disease, and cancer.

Unlike living cells, many viruses do not have a plasma membrane or any of the structures necessary to sustain life. Some viruses are simply composed of an inert protein shell containing DNA or RNA. To reproduce, viruses must invade a living cell, which serves as a host, and then take over the hosts cellular apparatus. But how does a virus recognize its host?

However, viruses have very small amounts of DNA or RNA compared to humans, and, as a result, viral reproduction can occur rapidly. Viral reproduction invariably produces errors that can lead to changes in newly produced viruses; these changes mean that the viral proteins that interact with cell-surface receptors may evolve in such a way that they can bind to receptors in a new host. Such changes happen randomly and quite often in the reproductive cycle of a virus, but the changes only matter if a virus with new binding properties comes into contact with a suitable host.

In the case of influenza, this situation can occur in settings where animals and people are in close contact, such as poultry and swine farms. Once a virus jumps to a new host, it can spread quickly. Scientists watch newly appearing viruses (called emerging viruses) closely in the hope that such monitoring can reduce the likelihood of global viral epidemics.

Ion channel-linked receptors bind a ligand and open a channel through the membrane that allows specific ions to pass through. To form a channel, this type of cell-surface receptor has an extensive membrane-spanning region. In order to interact with the phospholipid fatty acid tails that form the center of the plasma membrane, many of the amino acids in the membrane-spanning region are hydrophobic in nature.

Conversely, the amino acids that line the inside of the channel are hydrophilic to allow for the passage of water or ions. When a ligand binds to the extracellular region of the channel, there is a conformational change in the proteins structure that allows ions such as sodium, calcium, magnesium, and hydrogen to pass through (see the figure below). 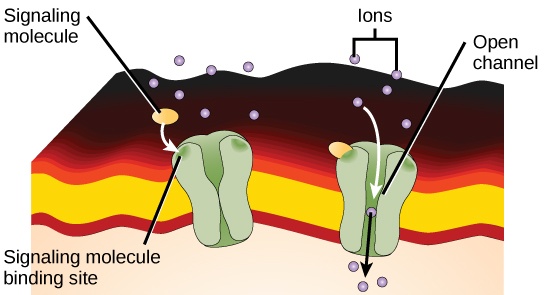 Gated ion channels form a pore through the plasma membrane that opens when the signaling molecule binds. The open pore then allows ions to flow into or out of the cell.

Cell signaling using G-protein-linked receptors occurs as a cyclic series of events. Before the ligand binds, the inactive G-protein can bind to a newly revealed site on the receptor specific for its binding. Once the G-protein binds to the receptor, the resultant shape change activates the G-protein, which releases GDP and picks up GTP. 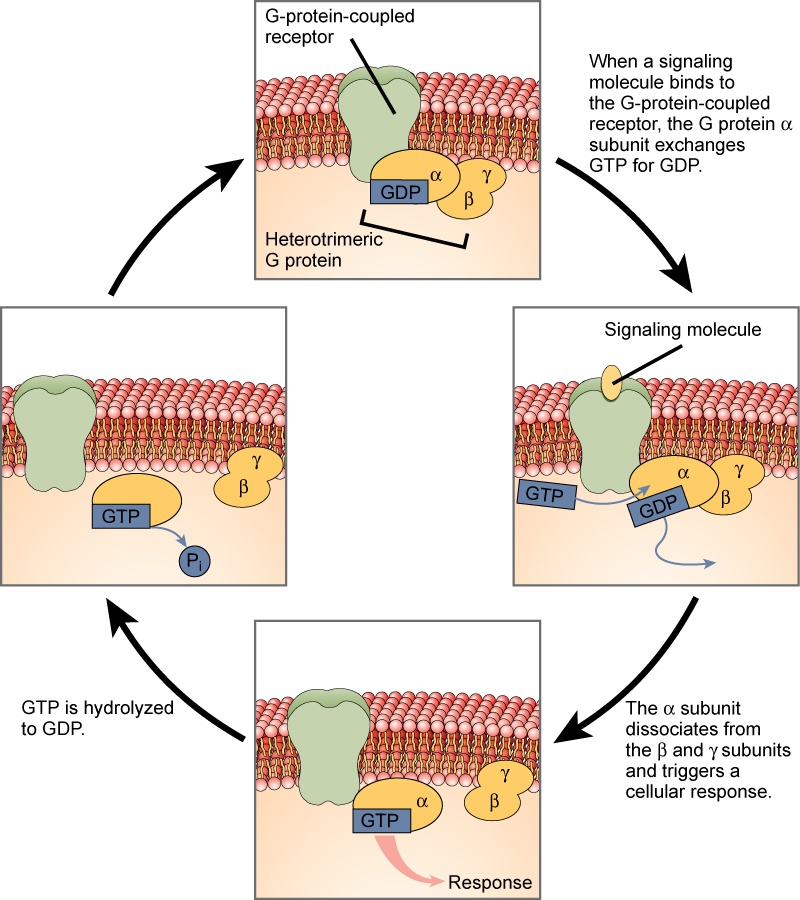 Heterotrimeric G proteins have three subunits: α, β, and γ. When a signaling molecule binds to a G-protein-coupled receptor in the plasma membrane, a GDP molecule associated with the α subunit is exchanged for GTP. The β and γ subunits dissociate from the α subunit, and a cellular response is triggered either by the α subunit or the dissociated βγ pair. Hydrolysis of GTP to GDP terminates the signal.

In cholera (see the figure below), for example, the water-borne bacterium Vibrio cholerae produces a toxin, choleragen, that binds to cells lining the small intestine. The toxin then enters these intestinal cells, where it modifies a G-protein that controls the opening of a chloride channel and causes it to remain continuously active, resulting in large losses of fluids from the body and potentially fatal dehydration as a result. 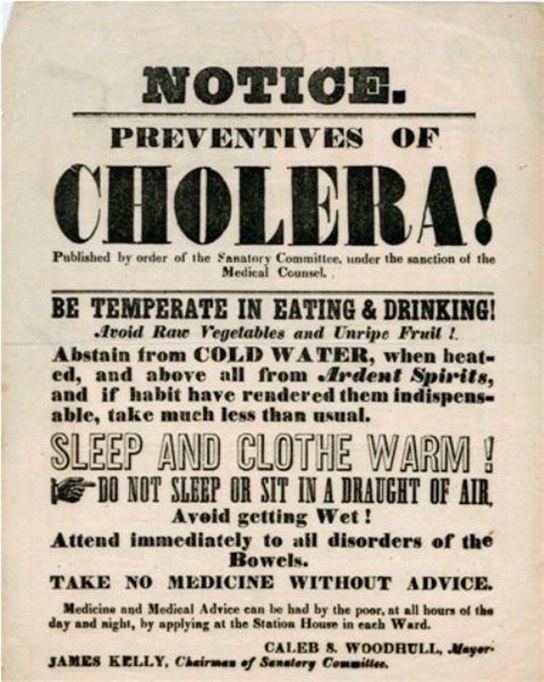 Transmitted primarily through contaminated drinking water, cholera is a major cause of death in the developing world and in areas where natural disasters interrupt the availability of clean water. The cholera bacterium, Vibrio cholerae, creates a toxin that modifies G-protein-mediated cell signaling pathways in the intestines. Modern sanitation eliminates the threat of cholera outbreaks, such as the one that swept through New York City in 1866. This poster from that era shows how, at that time, the way that the disease was transmitted was not understood. (credit: New York City Sanitary Commission)

When a ligand binds to the extracellular domain, a signal is transferred through the membrane, activating the enzyme. Activation of the enzyme sets off a chain of events within the cell that eventually leads to a response. One example of this type of enzyme-linked receptor is the tyrosine kinase receptor (see the figure below).

A kinase is an enzyme that transfers phosphate groups from ATP to another protein. The tyrosine kinase receptor transfers phosphate groups to tyrosine molecules (tyrosine residues). First, signaling molecules bind to the extracellular domain of two nearby tyrosine kinase receptors. The two neighboring receptors then bond together, or dimerize. Phosphates are then added to tyrosine residues on the intracellular domain of the receptors (phosphorylation). The phosphorylated residues can then transmit the signal to the next messenger within the cytoplasm. 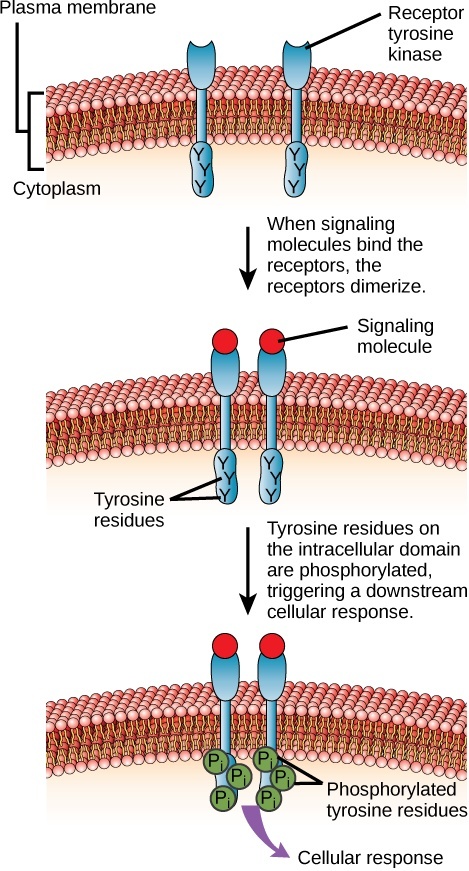 HER2 is a receptor tyrosine kinase. In 30 percent of human breast cancers, HER2 is permanently activated, resulting in unregulated cell division. Lapatinib, a drug used to treat breast cancer, inhibits HER2 receptor tyrosine kinase autophosphorylation (the process by which the receptor adds phosphates onto itself), thus reducing tumor growth by 50 percent. Besides autophosphorylation, which of the following steps would be inhibited by Lapatinib?

The downstream cellular response would be inhibited.