Signaling in bacteria enables bacteria to monitor extracellular conditions, ensure that there are sufficient amounts of nutrients, and ensure that hazardous situations are avoided. There are circumstances, however, when bacteria communicate with each other.

The first evidence of bacterial communication was observed in a bacterium that has a symbiotic relationship with Hawaiian bobtail squid. When the population density of the bacteria reaches a certain level, specific gene expression is initiated, and the bacteria produce bioluminescent proteins that emit light. Because the number of cells present in the environment (cell density) is the determining factor for signaling, bacterial signaling was named quorum sensing. In politics and business, a quorum is the minimum number of members required to be present to vote on an issue.

When AHL enters target bacteria, it binds to transcription factors, which then switch gene expression on or off (see the figure below). The peptide autoinducers stimulate more complicated signaling pathways that include bacterial kinases. The changes in bacteria following exposure to autoinducers can be quite extensive. The pathogenic bacterium Pseudomonas aeruginosa has 616 different genes that respond to autoinducers. 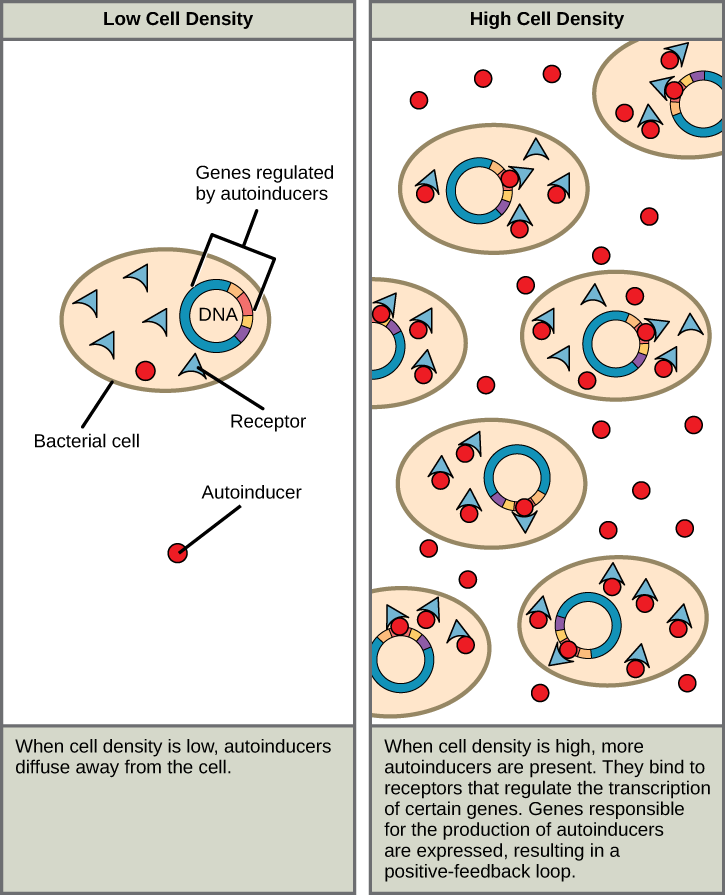 Autoinducers are small molecules or proteins produced by bacteria that regulate gene expression.

Which of the following statements about quorum sensing is false?

Autoinducer can only act on a different cell: it cannot act on the cell in which it is made.

Some species of bacteria that use quorum sensing form biofilms, complex colonies of bacteria (often containing several species) that exchange chemical signals to coordinate the release of toxins that will attack the host. Bacterial biofilms (see the figure below) can sometimes be found on medical equipment; when biofilms invade implants such as hip or knee replacements or heart pacemakers, they can cause life-threatening infections.

Cell-cell communication enables these (a) Staphylococcus aureus bacteria to work together to form a biofilm inside a hospital patient’s catheter, seen here via scanning electron microscopy. S. aureus is the main cause of hospital-acquired infections. (b) Hawaiian bobtail squid have a symbiotic relationship with the bioluminescent bacteria Vibrio fischeri. The luminescence makes it difficult to see the squid from below because it effectively eliminates its shadow. In return for camouflage, the squid provides food for the bacteria. Free-living V. fischeri do not produce luciferase, the enzyme responsible for luminescence, but V. fischeri living in a symbiotic relationship with the squid do. Quorum sensing determines whether the bacteria should produce the luciferase enzyme. (credit a: modifications of work by CDC/Janice Carr; credit b: modifications of work by Cliff1066/Flickr)

What advantage might biofilm production confer on the S. aureus inside the catheter?

S. aureus produces a biofilm because the higher cell density in the biofilm permits the formation of a dense surface that helps protect the bacteria from antibiotics.

Research on the details of quorum sensing has led to advances in growing bacteria for industrial purposes. Recent discoveries suggest that it may be possible to exploit bacterial signaling pathways to control bacterial growth; this process could replace or supplement antibiotics that are no longer effective in certain situations.

The first life on our planet consisted of single-celled prokaryotic organisms that had limited interaction with each other. While some external signaling occurs between different species of single-celled organisms, the majority of signaling within bacteria and yeasts concerns only other members of the same species. The evolution of cellular communication is an absolute necessity for the development of multicellular organisms, and this innovation is thought to have required approximately 2.5 billion years to appear in early life forms.

Yeasts are single-celled eukaryotes, and therefore have a nucleus and organelles characteristic of more complex life forms. Comparisons of the genomes of yeasts, nematode worms, fruit flies, and humans illustrate the evolution of increasingly complex signaling systems that allow for the efficient inner workings that keep humans and other complex life forms functioning correctly.

Kinases are a major component of cellular communication, and studies of these enzymes illustrate the evolutionary connectivity of different species. Yeasts have 130 types of kinases. More complex organisms such as nematode worms and fruit flies have 454 and 239 kinases, respectively. Of the 130 kinase types in yeast, 97 belong to the 55 subfamilies of kinases that are found in other eukaryotic organisms. The only obvious deficiency seen in yeasts is the complete absence of tyrosine kinases. It is hypothesized that phosphorylation of tyrosine residues is needed to control the more sophisticated functions of development, differentiation, and cellular communication used in multicellular organisms.

Because yeasts contain many of the same classes of signaling proteins as humans, these organisms are ideal for studying signaling cascades. Yeasts multiply quickly and are much simpler organisms than humans or other multicellular animals. Therefore, the signaling cascades are also simpler and easier to study, although they contain similar counterparts to human signaling.1

Watch this collection of interview clips with biofilm researchers in “What Are Bacterial Biofilms?”