Sperm cells and muscle cells need lots of energy. What do they have in common?

In addition to the nucleus, eukaryotic cells have many other organelles, including ribosomes and mitochondria. Ribosomes are present in all cells.

Ribosomes are small organelles and are the sites of protein synthesis (or assembly). They are made of ribosomal protein and ribosomal RNA, and are found in both eukaryotic and prokaryotic cells. Unlike other organelles, ribosomes are not surrounded by a membrane. Each ribosome has two parts, a large and a small subunit, as shown in the figure below. The subunits are attached to one another. Ribosomes can be found alone or in groups within the cytoplasm. Some ribosomes are attached to the endoplasmic reticulum (ER) (as shown in the figure below), and others are attached to the nuclear envelope. 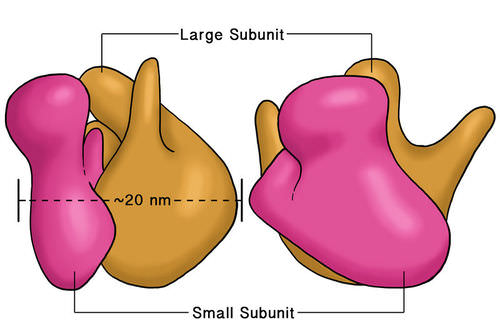 The two subunits that make up a ribosome, small organelles that are intercellular protein factories.

Ribozymes are RNA molecules that catalyze chemical reactions, such as translation. Translation is the process of ordering the amino acids in the assembly of a protein, and translation will be discussed more in another concept. Briefly, the ribosomes interact with other RNA molecules to make chains of amino acids called polypeptide chains, due to the peptide bond that forms between individual amino acids. Polypeptide chains are built from the genetic instructions held within a messenger RNA (mRNA) molecule. Polypeptide chains that are made on the rough ER (discussed below) are inserted directly into the ER and then are transported to their various cellular destinations. Ribosomes on the rough ER usually produce proteins that are destined for the cell membrane.

A mitochondrion (mitochondria, plural), is a membrane-enclosed organelle that is found in most eukaryotic cells. Mitochondria are called the “power plants” of the cell because they are the sites of cellular respiration, where they use energy from organic compounds to make ATP (adenosine triphosphate). ATP is the cell’s energy source that is used for such things such as movement and cell division. Some ATP is made in the cytosol of the cell, but most of it is made inside mitochondria. The number of mitochondria in a cell depends on the cell’s energy needs. For example, active human muscle cells may have thousands of mitochondria, while less active red blood cells do not have any.

(a): Electron micrograph of a single mitochondrion, within which you can see many cristae. Mitochondria range from 1 to 10 Î¼m in size. (b): This model of a mitochondrion shows the organized arrangement of the inner and outer membranes, the protein matrix, and the folded inner mitochondrial membranes.

Although most of a cell’s DNA is contained in the cell nucleus, mitochondria have their own DNA. Mitochondria are able to reproduce asexually, and scientists think that they are descended from prokaryotes. According to the endosymbiotic theory, mitochondria were once free-living prokaryotes that infected or were engulfed by ancient eukaryotic cells. The invading prokaryotes were protected inside the eukaryotic host cell, and in turn the prokaryote supplied extra ATP to its host.