All cells have a plasma membrane. This membrane surrounds the cell. So what is its role?

Can molecules enter and leave the cell? Yes. Can anything or everything enter or leave? No. So, what determines what can go in or out? Is it the nucleus? The DNA? Or the plasma membrane?

The plasma membrane (also known as the cell membrane) forms a barrier between the cytoplasm inside the cell and the environment outside the cell. It protects and supports the cell and also controls everything that enters and leaves the cell. It allows only certain substances to pass through, while keeping others in or out. The ability to allow only certain molecules in or out of the cell is referred to as selective permeability or semipermeability. To understand how the plasma membrane controls what crosses into or out of the cell, you need to know its composition.

The plasma membrane is composed mainly of phospholipids, which consist of fatty acids and alcohol. The phospholipids in the plasma membrane are arranged in two layers, called a phospholipid bilayer. As shown in the figure below, each phospholipid molecule has a head and two tails. The head “loves” water (hydrophilic) and the tails “hate” water (hydrophobic). The water-hating tails are on the interior of the membrane, whereas the water-loving heads point outwards, toward either the cytoplasm or the fluid that surrounds the cell. 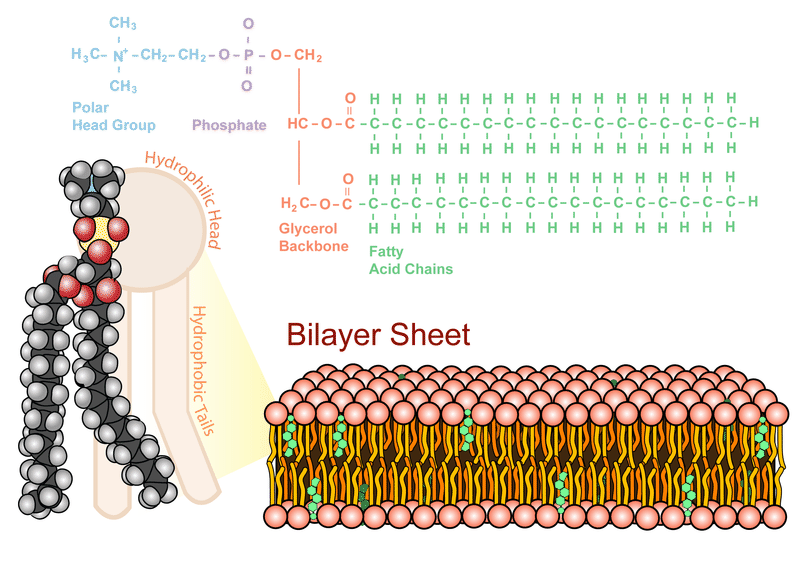 Candy corn is a very tasty treat. In this video by , astronaut Don Pettit uses Candy Corn to demonstrate the effects of hydrophobic and hydrophilic interactions.