Can you help me move?

What is one of the questions no one likes to be asked? Sometimes the cell needs help moving things as well, or facilitating the diffusion process. And this would be the job of a special type of protein.

A gated channel protein is a transport protein that opens a “gate,” allowing a molecule to pass through the membrane. Gated channels have a binding site that is specific for a given molecule or ion. A stimulus causes the “gate” to open or shut. The stimulus may be chemical or electrical signals, temperature, or mechanical force, depending on the type of gated channel. For example, the sodium gated channels of a nerve cell are stimulated by a chemical signal which causes them to open and allow sodium ions into the cell. Glucose molecules are too big to diffuse through the plasma membrane easily, so they are moved across the membrane through gated channels. In this way glucose diffuses very quickly across a cell membrane, which is important because many cells depend on glucose for energy. 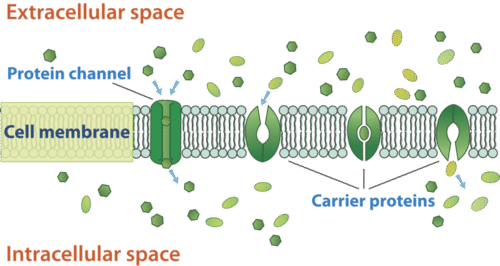 Ions such as sodium (Na+), potassium (K+), calcium (Ca2+), and chloride (Cl–), are important for many cell functions. Because they are charged (polar), these ions do not diffuse through the membrane. Instead they move through ion channel proteins where they are protected from the hydrophobic interior of the membrane. Ion channels allow the formation of a concentration gradient between the extracellular fluid and the cytosol. Ion channels are very specific, as they allow only certain ions through the cell membrane. Some ion channels are always open, others are “gated” and can be opened or closed. Gated ion channels can open or close in response to different types of stimuli, such as electrical or chemical signals.