Fish cells, like all cells, have semi-permeable membranes. Eventually, the concentration of “stuff” on either side of them will even out. A fish that lives in salt water will have somewhat salty water inside itself. Put it in the freshwater, and the freshwater will, through osmosis, enter the fish, causing its cells to swell, and the fish will die. What will happen to a freshwater fish in the ocean?

Imagine you have a cup that has 100ml water, and you add 15g of table sugar to the water. The sugar dissolves and the mixture that is now in the cup is made up of a solute (the sugar) that is dissolved in the solvent (the water). The mixture of a solute in a solvent is called a solution.

Osmosis is the diffusion of water molecules across a selectively permeable membrane from an area of higher concentration to an area of lower concentration. Water moves into and out of cells by osmosis. If a cell is in a hypertonic solution, the solution has a lower water concentration than the cell cytosol, and water moves out of the cell until both solutions are isotonic. Cells placed in a hypotonic solution will take in water across their membrane until both the external solution and the cytosol are isotonic. 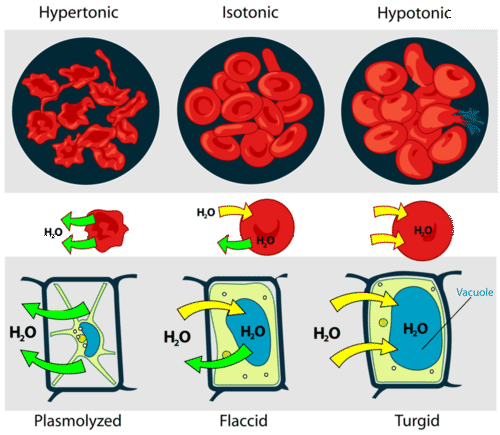 Unless an animal cell (such as the red blood cell in the top panel) has an adaptation that allows it to alter the osmotic uptake of water, it will lose too much water and shrivel up in a hypertonic environment. If placed in a hypotonic solution, water molecules will enter the cell, causing it to swell and burst. Plant cells (bottom panel) become plasmolyzed in a hypertonic solution, but tend to do best in a hypotonic environment. Water is stored in the central vacuole of the plant cell.

When water moves into a cell by osmosis, osmotic pressure may build up inside the cell. If a cell has a cell wall, the wall helps maintain the cell’s water balance. Osmotic pressure is the main cause of support in many plants. When a plant cell is in a hypotonic environment, the osmotic entry of water raises the turgor pressure exerted against the cell wall until the pressure prevents more water from coming into the cell. At this point the plant cell is turgid (the figure below). The effects of osmotic pressures on plant cells are shown in the figure below. 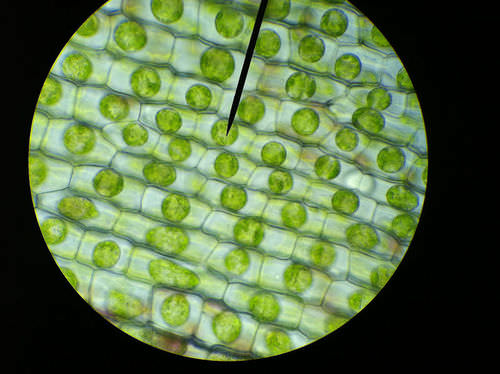 The central vacuoles of the plant cells in this image are full of water, so the cells are turgid.

The action of osmosis can be very harmful to organisms, especially ones without cell walls. For example, if a saltwater fish (whose cells are isotonic with seawater), is placed in fresh water, its cells will take on excess water, lyse, and the fish will die. Another example of a harmful osmotic effect is the use of table salt to kill slugs and snails.

Organisms that live in a hypotonic environment such as freshwater, need a way to prevent their cells from taking in too much water by osmosis. A contractile vacuole is a type of vacuole that removes excess water from a cell. Freshwater protists, such as the paramecium shown in the figure below, have a contractile vacuole. The vacuole is surrounded by several canals, which absorb water by osmosis from the cytoplasm. After the canals fill with water, the water is pumped into the vacuole. When the vacuole is full, it pushes the water out of the cell through a pore. 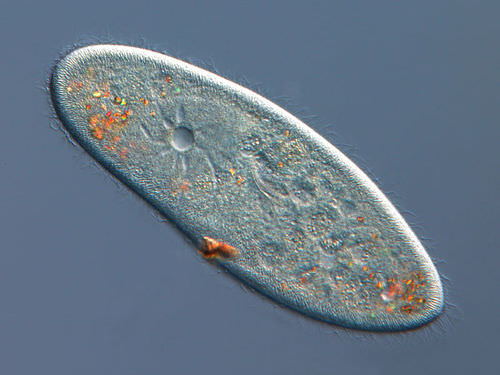 The contractile vacuole is the star-like structure within the paramecia.