How do you make a cell with half the DNA?

The process that produces haploid gametes is meiosis. Meiosis is a type of cell division in which the number of chromosomes is reduced by half. It occurs only in certain special cells of the organisms. During meiosis, homologous chromosomes separate, and haploid cells form that have only one chromosome from each pair. Two cell divisions occur during meiosis, and a total of four haploid cells are produced. The two cell divisions are called meiosis I and meiosis II. The overall process of meiosis is summarized in the figure below. 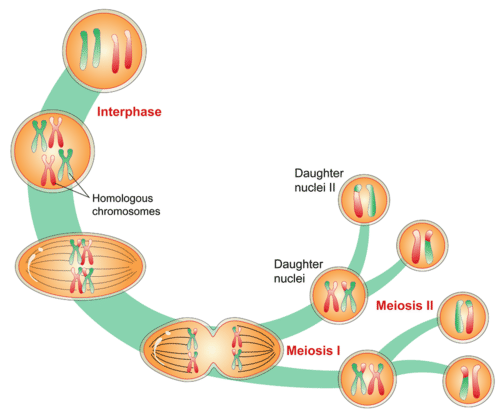 Overview of Meiosis. During meiosis, homologous chromosomes separate and go to different daughter cells. This diagram shows just the nuclei of the cells. Notice the exchange of genetic material that occurs prior to the first cell division.

Meiosis I begins after DNA replicates during interphase of the cell cycle. In both meiosis I and meiosis II, cells go through the same four phases as mitosis – prophase, metaphase, anaphase and telophase. However, there are important differences between meiosis I and mitosis. The flowchart in the figure below shows what happens in both meiosis I and II. 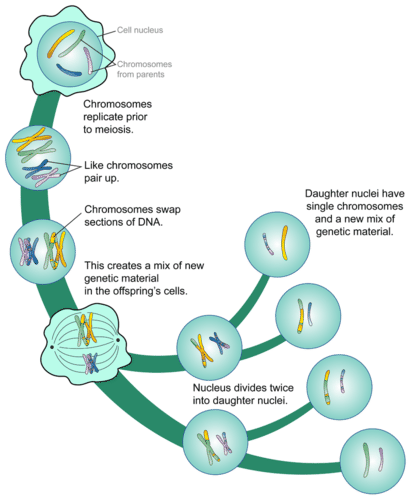 Compare meiosis I in this flowchart with the figure from the Mitosis and Cytokinesis concept. How does meiosis I differ from mitosis? Notice at the beginning of meiosis (prophase I), homologous chromosomes exchange segments of DNA. This is known as crossing-over, and is unique to this phase of meiosis.