What type of acid do these fruits contain?

Citric acid. Citric acid is also the first product formed in the Krebs cycle, and therefore this acid occurs in the metabolism of virtually all living things.

Recall that glycolysis, stage I of cellular respiration, produces two molecules of pyruvate. These molecules enter the matrix of a mitochondrion, where they start the Krebs cycle. The reactions that occur next are shown in the figure below. 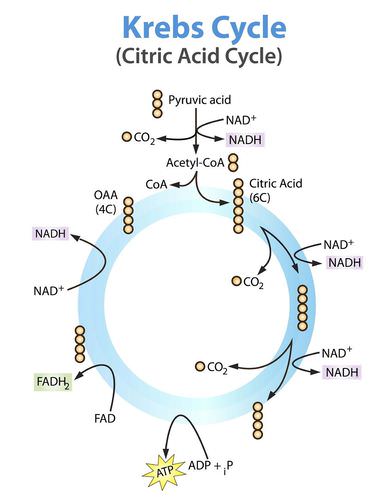 The Krebs cycle starts with pyruvic acid from glycolysis. Each small circle in the diagram represents one carbon atom. For example, citric acid is a six carbon molecule, and OAA (oxaloacetate) is a four carbon molecule. Follow what happens to the carbon atoms as the cycle proceeds. In one turn through the cycle, how many molecules are produced of ATP? How many molecules of NADH and FADH2 are produced?

Before the Krebs cycle begins, pyruvic acid, which has three carbon atoms, is split apart and combined with an enzyme known as CoA, which stands for coenzyme A. The product of this reaction is a two-carbon molecule called acetyl-CoA. The third carbon from pyruvic acid combines with oxygen to form carbon dioxide, which is released as a waste product. High-energy electrons are also released and captured in NADH.

Steps of the Krebs Cycle

The Krebs cycle itself actually begins when acetyl-CoA combines with a four-carbon molecule called OAA (oxaloacetate) (see the figure above). This produces citric acid, which has six carbon atoms. This is why the Krebs cycle is also called the citric acid cycle.

After citric acid forms, it goes through a series of reactions that release energy. The energy is captured in molecules of NADH, ATP, and FADH2, another energy-carrying compound. Carbon dioxide is also released as a waste product of these reactions.

The final step of the Krebs cycle regenerates OAA, the molecule that began the Krebs cycle. This molecule is needed for the next turn through the cycle. Two turns are needed because glycolysis produces two pyruvic acid molecules when it splits glucose.

Results of the Krebs Cycle

After the second turn through the Krebs cycle, the original glucose molecule has been broken down completely. All six of its carbon atoms have combined with oxygen to form carbon dioxide. The energy from its chemical bonds has been stored in a total of 16 energy-carrier molecules. These molecules are: