How do you slice a molecule of glucose in half?

With sharp knives? Not really. But you essentially slice it in half through glycolysis. This is an extremely important part of cellular respiration. It happens all the time, both with and without oxygen. And in the process, transfers some energy to ATP.

The first stage of cellular respiration is glycolysis. It does not require oxygen, and it does not take place in the mitochondrion – it takes place in the cytosol of the cytoplasm.

When was the last time you enjoyed yogurt on your breakfast cereal, or had a tetanus shot? These experiences may appear unconnected, but both relate to bacteria which do not use oxygen to make ATP. In fact, tetanus bacteria cannot survive if oxygen is present. However, Lactobacillus acidophilus (bacteria which make yogurt) and Clostridium tetani (bacteria which cause tetanus or lockjaw) share with nearly all organisms the first stage of cellular respiration, glycolysis. Because glycolysis is universal, whereas aerobic (oxygen-requiring) cellular respiration is not, most biologists consider it to be the most fundamental and primitive pathway for making ATP.

The word glycolysis means “glucose splitting,” which is exactly what happens in this stage. Enzymes split a molecule of glucose into two molecules of pyruvate (also known as pyruvic acid). This occurs in several steps, as shown in the figure below. 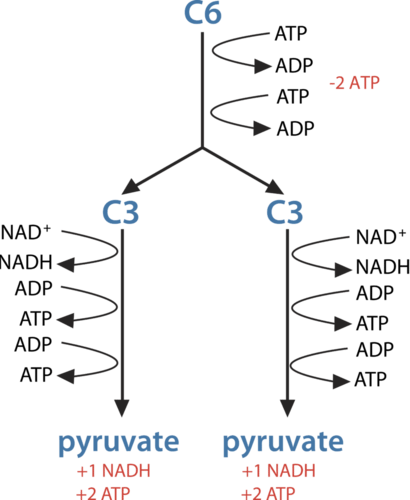 In glycolysis, glucose (C6) is split into two 3-carbon (C3) pyruvate molecules. This releases energy, which is transferred to ATP. How many ATP molecules are made during this stage of cellular respiration?