To run a marathon, probably. Where does this extra energy come from? Carbohydrate loading is a strategy used by endurance athletes to maximize the storage of energy, in the form of glycogen, in the muscles. Glycogen forms an energy reserve that can be quickly mobilized to meet a sudden need for glucose, which is then turned into ATP through the process of cellular respiration.

You know that the fish you had for lunch contained protein molecules. But do you know that the atoms in that protein could easily have formed the color in a dragonfly’s eye, the heart of a water flea, and the whiplike tail of a Euglena before they hit your plate as sleek fish muscle? Food consists of organic (carbon-containing) molecules which store energy in the chemical bonds between their atoms. Organisms use the atoms of food molecules to build larger organic molecules including proteins, DNA, and fats (lipids) and use the energy in food to power life processes.

By breaking the bonds in food molecules, cells release energy to build new compounds. Although some energy dissipates as heat at each energy transfer, much of it is stored in the newly made molecules. Chemical bonds in organic molecules are a reservoir of the energy used to make them. Fueled by the energy from food molecules, cells can combine and recombine the elements of life to form thousands of different molecules. Both the energy (despite some loss) and the materials (despite being reorganized) pass from producer to consumer â€“ perhaps from algal tails, to water flea hearts, to dragonfly eye colors, to fish muscle, to you!

The process of photosynthesis, which usually begins the flow of energy through life, uses many different kinds of energy-carrying molecules to transform sunlight energy into chemical energy and build food. Some carrier molecules hold energy briefly, quickly shifting it like a hot potato to other molecules. This strategy allows energy to be released in small, controlled amounts. An example starts in chlorophyll, the green pigment present in most plants, which helps convert solar energy to chemical energy.

When a chlorophyll molecule absorbs light energy, electrons are excited and “jump” to a higher energy level. The excited electrons then bounce to a series of carrier molecules, losing a little energy at each step. Most of the “lost” energy powers some small cellular task, such as moving ions across a membrane or building up another molecule. Another short-term energy carrier important to photosynthesis, NADPH, holds chemical energy a bit longer but soon “spends” it to help to build sugar.

Two of the most important energy-carrying molecules are glucose and adenosine triphosphate, commonly referred to as ATP. These are nearly universal fuels throughout the living world and are both key players in photosynthesis, as shown below.

A molecule of glucose, which has the chemical formula C6H12O6, carries a packet of chemical energy just the right size for transport and uptake by cells. In your body, glucose is the “deliverable” form of energy, carried in your blood through capillaries to each of your 100 trillion cells. Glucose is also the carbohydrate produced by photosynthesis, and as such is the near-universal food for life. 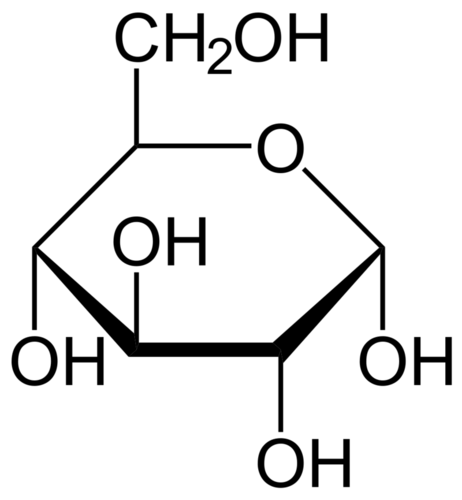 Glucose is the energy-rich product of photosynthesis, a universal food for life. It is also the primary form in which your bloodstream delivers energy to every cell in your body.

ATP molecules store smaller quantities of energy, but each releases just the right amount to actually do work within a cell. Muscle cell proteins, for example, pull each other with the energy released when bonds in ATP break open (discussed below). The process of photosynthesis also makes and uses ATP – for energy to build glucose! ATP, then, is the useable form of energy for your cells. ATP is commonly referred to as the “energy currency” of the cell.

Why do we need both glucose and ATP?

Why don’t plants just make ATP and be done with it? If energy were money, ATP would be a quarter. Enough money to operate a parking meter or washing machine. Glucose would be a ten dollar bill â€“ much easier to carry around in your wallet, but too large to do the actual work of paying for parking or washing. Just as we find several denominations of money useful, organisms need several “denominations” of energy â€“ a smaller quantity for work within cells, and a larger quantity for stable storage, transport, and delivery to cells. (Actually a glucose molecule would be about $9.50, as under the proper conditions, up to 38 ATP are produced for each glucose molecule.)

Let’s take a closer look at a molecule of ATP. Although it carries less energy than glucose, its structure is more complex. The “A” in ATP refers to the majority of the molecule, adenosine, a combination of a nitrogenous base and a five-carbon sugar. The “TP” indicates the three phosphates, linked by bonds which hold the energy actually used by cells. Usually, only the outermost bond breaks to release or spend energy for cellular work.

An ATP molecule, shown in the figure below, is like a rechargeable battery: its energy can be used by the cell when it breaks apart into ADP (adenosine diphosphate) and phosphate, and then the “worn-out battery” ADP can be recharged using new energy to attach a new phosphate and rebuild ATP. The materials are recyclable, but recall that energy is not!

How much energy does it cost to do your body’s work? A single cell uses about 10 million ATP molecules per second, and recycles all of its ATP molecules about every 20-30 seconds. 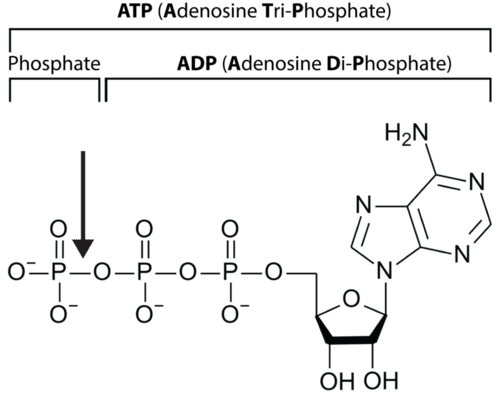 An arrow shows the bond between two phosphate groups in an ATP molecule. When this bond breaks, its chemical energy can do cellular work. The resulting ADP molecule is recycled when new energy attaches another phosphate, rebuilding ATP.