What’s the biggest cell on Earth?

The ostrich egg – unfertilized, of course. Yes, this egg, just like a human ovum, is just one cell. The egg shell membrane encloses the nucleus containing the genetic material and the cytoplasm.

At the end of meiosis, four haploid cells have been produced, but the cells are not yet gametes. The cells need to develop before they become mature gametes capable of fertilization. The development of haploid cells into gametes is called gametogenesis. 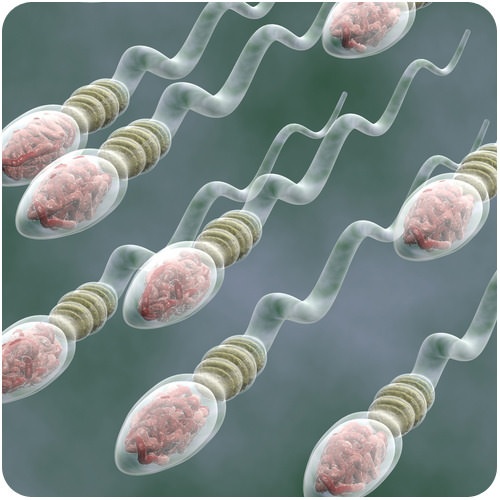 How much DNA is in a gamete? The sperm cell forms by meiosis and spermatogenesis. Because it forms by meiosis, the sperm cell has only half as much DNA as a body cell. Notice the three distinct segments: a head piece, a flagella tail and a midpiece of mostly mitochondria. What is the role of each section?

Gametogenesis may differ between males and females. Male gametes are called sperm. Female gametes are called eggs. In human males, for example, the process that produces mature sperm cells is called spermatogenesis. During this process, sperm cells grow a tail and gain the ability to “swim,” like the human sperm cell shown in the figure below. In human females, the process that produces mature eggs is called oogenesis. Just one egg is produced from the four haploid cells that result from meiosis. The single egg is a very large cell, as you can see from the human egg in the figure below. 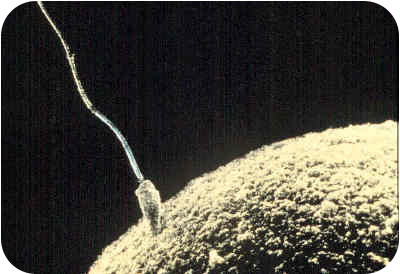 A human sperm is a tiny cell with a tail. A human egg is much larger. Both cells are mature haploid gametes that are capable of fertilization. What process is shown in this photograph? Notice the sperm with the head piece containing the genetic material, a flagella tail that propels the sperm, and a midpiece of mostly mitochondria, supplying ATP.

During spermatogenesis, primary spermatocytes go through the first cell division of meiosis to produce secondary spermatocytes. These are haploid cells. Secondary spermatocytes then quickly complete the meiotic division to become spermatids, which are also haploid cells. The four haploid cells produced from meiosis develop a flagellum tail and compact head piece to become mature sperm cells, capable of swimming and fertilizing an egg. The compact head, which has lost most of its cytoplasm, is key in the formation of a streamlined shape. The middle piece of the sperm, connecting the head to the tail, contains many mitochondria, providing energy to the cell. The sperm cell essentially contributes only DNA to the zygote.

On the other hand, the egg provides the other half of the DNA, but also organelles, building blocks for compounds such as proteins and nucleic acids, and other necessary materials. The egg, being much larger than a sperm cell, contains almost all of the cytoplasm a developing embryo will have during its first few days of life. Therefore, oogenesis is a much more complicated process than spermatogenesis.

Oogenesis begins before birth and is not completed until after fertilization. Oogenesis begins when oogonia (singular, oogonium), which are the immature eggs that form in the ovaries before birth and have the diploid number of chromosomes, undergo mitosis to form primary oocytes, also with the diploid number. Oogenesis proceeds as a primary oocyte undergoes the first cell division of meiosis to form secondary oocytes with the haploid number of chromosomes. A secondary oocyte only undergoes the second meiotic cell division to form a haploid ovum if it is fertilized by a sperm.

The one egg cell that results from meiosis contains most of the cytoplasm, nutrients, and organelles. This unequal distribution of materials produces one large cell, and one cell with little more than DNA. This other cell, known as a polar body, eventually breaks down. The larger cell undergoes meiosis II, once again producing a large cell and a polar body. The large cell develops into the mature gamete, called an ovum (the figure below). The unequal distribution of the cytoplasm during oogenesis is necessary as the zygote that results from fertilization receives all of its cytoplasm from the egg. So the egg needs to have as much cytoplasm as possible.