When you combine grapes and yeast, what have you begun to make?

Wine. It may be slightly more complicated than that, but you need to start with grapes and yeast, and allow a natural fermentation process to occur. Essentially, this is respiration without oxygen.

In lactic acid fermentation, pyruvic acid from glycolysis changes to lactic acid. This is shown in the figure below. In the process, NAD+ forms from NADH. NAD+, in turn, lets glycolysis continue. This results in additional molecules of ATP. This type of fermentation is carried out by the bacteria in yogurt. It is also used by your own muscle cells when you work them hard and fast.

Lactic acid fermentation produces lactic acid and NAD+. The NAD+ cycles back to allow glycolysis to continue so more ATP is made. Each circle represents a carbon atom.

In alcoholic fermentation, pyruvic acid changes to alcohol and carbon dioxide. This is shown in the figure below. NAD+ also forms from NADH, allowing glycolysis to continue making ATP. This type of fermentation is carried out by yeasts and some bacteria. It is used to make bread, wine, and biofuels.

Have your parents ever put corn in the gas tank of their car? They did if they used gas containing ethanol. Ethanol is produced by alcoholic fermentation of the glucose in corn or other plants. This type of fermentation also explains why bread dough rises. Yeasts in bread dough use alcoholic fermentation and produce carbon dioxide gas. The gas forms bubbles in the dough, which cause the dough to expand. The bubbles also leave small holes in the bread after it bakes, making the bread light and fluffy. Do you see the small holes in the slice of bread in the figure below? 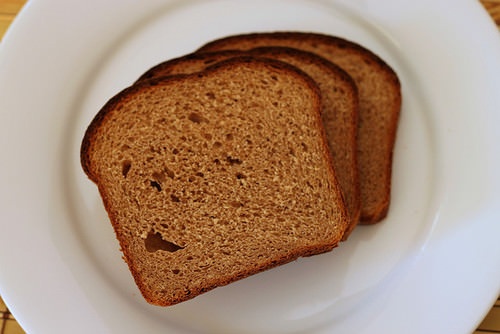 The small holes in bread are formed by bubbles of carbon dioxide gas. The gas was produced by alcoholic fermentation carried out by yeast.

Behind every fart is an army of gut bacteria undergoing some crazy biochemistry. These bacteria break down the remains of digested food through fermentation, creating gas in the process.