Ways to transport. To make ATP, energy must be “transported” – first from glucose to NADH, and then somehow passed to ATP. How is this done? With an electron transport chain.

Electron transport is the final stage of aerobic respiration. In this stage, energy from NADH and FADH2, which result from the Krebs cycle, is transferred to ATP. Can you predict how this happens? (Hint: How does electron transport occur in photosynthesis?)

High-energy electrons are released from NADH and FADH2, and they move along electron transport chains, like those used in photosynthesis. The electron transport chains are on the inner membrane of the mitochondrion. As the high-energy electrons are transported along the chains, some of their energy is captured. This energy is used to pump hydrogen ions (from NADH and FADH2) across the inner membrane, from the matrix into the intermembrane space. Electron transport in a mitochondrion is shown in the figure below. 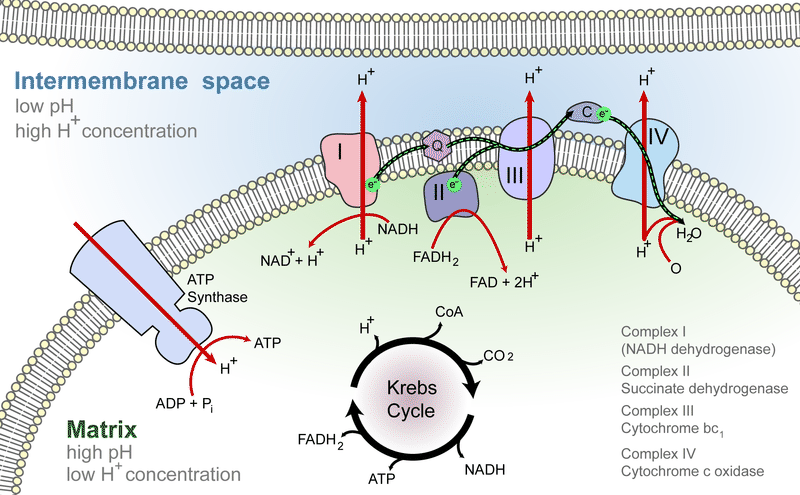 Electron-transport chains on the inner membrane of the mitochondrion carry out the last stage of cellular respiration.

The pumping of hydrogen ions across the inner membrane creates a greater concentration of the ions in the intermembrane space than in the matrix. This chemiosmotic gradient causes the ions to flow back across the membrane into the matrix, where their concentration is lower. ATP synthase acts as a channel protein, helping the hydrogen ions cross the membrane. It also acts as an enzyme, forming ATP from ADP and inorganic phosphate. After passing through the electron-transport chain, the “spent” electrons combine with oxygen to form water. This is why oxygen is needed; in the absence of oxygen, this process cannot occur.