How is it assured that every cell in your body has the same DNA?

Chromosomes, like those shown here, must form prior to cell division, to ensure that each daughter cell receives a complete set of genetic material. Essentially, each new cell receives half of each “X-shaped” chromosome.

In eukaryotic cells, the nucleus divides before the cell itself divides. The process in which the nucleus divides is called mitosis. Before mitosis occurs, a cell’s DNA is replicated. This is necessary so that each daughter cell will have a complete copy of the genetic material from the parent cell. How is the replicated DNA sorted and separated so that each daughter cell gets a complete set of the genetic material? To understand how this happens, you need to know more about chromosomes.

Chromatids and the Centromere

DNA condenses and coils into the familiar X-shaped form of a chromosome, shown in the figure below, only after it has replicated. (You can watch DNA coiling into a chromosome at the link below.) Because DNA has already replicated, each chromosome actually consists of two identical copies. The two copies are called sister chromatids. They are attached to one another at a region called the centromere. 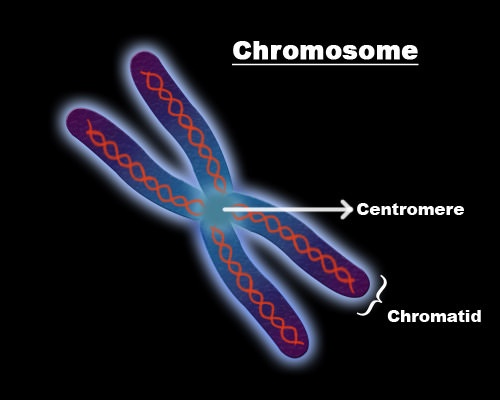 Chromosome. After DNA replicates, it forms chromosomes like the one shown here.