What do pancakes and chloroplasts have in common?

Photosynthesis occurs in two stages, which are shown in the figure below. 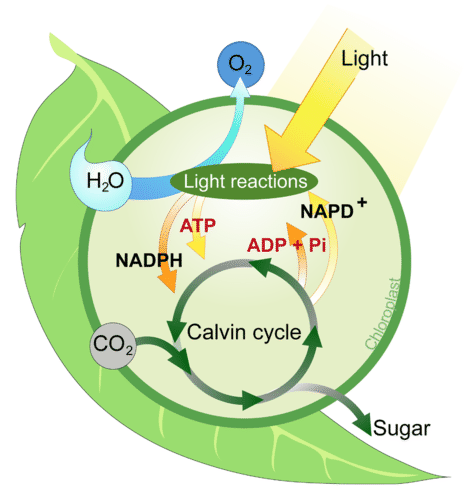 The two stages of photosynthesis are the light reactions and the Calvin cycle. Do you see how the two stages are related?

Before you read about these two stages of photosynthesis in greater detail, you need to know more about the chloroplast, where the two stages take place.

Photosynthesis, the process of turning the energy of sunlight into “food,” is divided into two basic sets of reactions, known as the light reactions and the Calvin cycle, which uses carbon dioxide. As you study the details in other concepts, refer frequently to the chemical equation of photosynthesis: 6CO2 + 6H2O + Light Energy â†’ C6H12O6 + 6O2. Photosynthesis occurs in the chloroplast, an organelle specific to plant cells.

If you examine a single leaf of a Winter Jasmine leaf, shown in the figure below, under a microscope, you will see within each cell dozens of small green ovals. These are chloroplasts, the organelles which conduct photosynthesis in plants and algae. Chloroplasts closely resemble some types of bacteria and even contain their own circular DNA and ribosomes. In fact, the endosymbiotic theory holds that chloroplasts were once independently living bacteria (prokaryotes). So when we say that photosynthesis occurs within chloroplasts, we speak not only of the organelles within plants and algae, but also of some bacteria â€“ in other words, virtually all photosynthetic autotrophs. 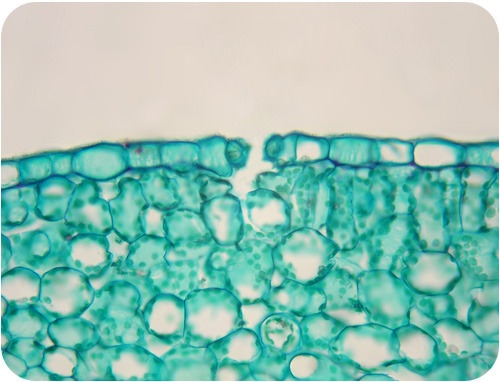 High power microscopic photo of the upper part of a Winter Jasmine leaf. Viewed under a microscope, many green chloroplasts are visible. 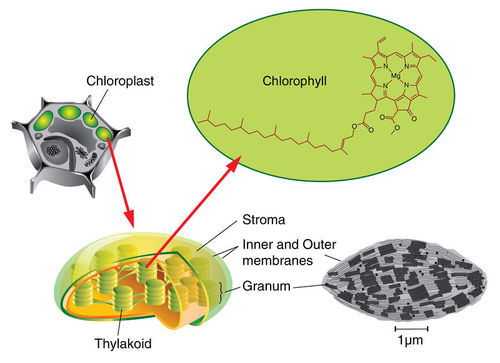 Electron carrier molecules are usually arranged in electron transport chains (ETCs). These accept and pass along energy-carrying electrons in small steps (the figure below). In this way, they produce ATP and NADPH, which temporarily store chemical energy. Electrons in transport chains behave much like a ball bouncing down a set of stairs â€“ a little energy is lost with each bounce. However, the energy “lost” at each step in an electron transport chain accomplishes a little bit of work, which eventually results in the synthesis of ATP. 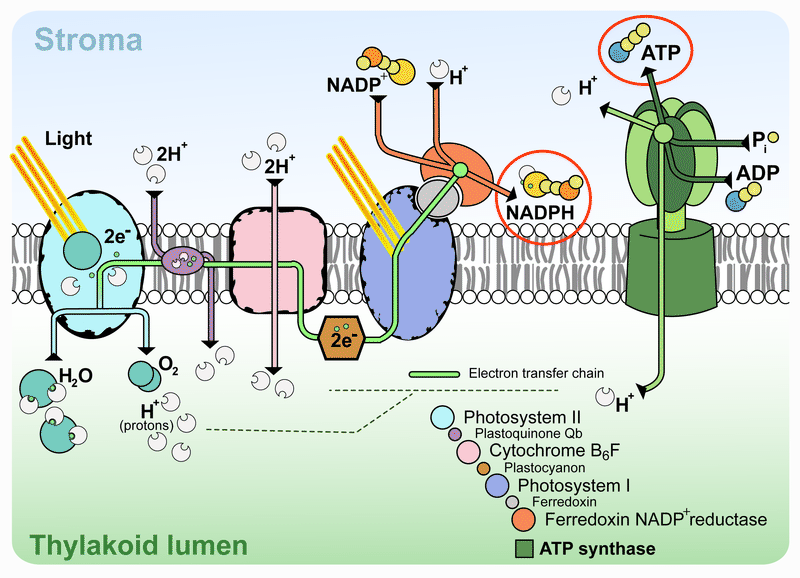