Because we’re hungry? Not necessarily. But biologically speakingâ€¦we eat to get energy. The food we eat is broken down, the glucose extracted, and that energy is converted into ATP.

What happens to the energy stored in glucose during photosynthesis? How do living things make use of this stored energy? The answer is cellular respiration. This process releases the energy in glucose to make ATP (adenosine triphosphate), the molecule that powers all the work of cells.

Cellular respiration involves many chemical reactions. The reactions can be summed up in this equation:

The reactions of cellular respiration can be grouped into three stages: glycolysis (stage 1), the Krebs cycle, also called the citric acid cycle (stage 2), and electron transport (stage 3). the figure below gives an overview of these three stages, which are further discussed in the concepts that follow. Glycolysis occurs in the cytosol of the cell and does not require oxygen, whereas the Krebs cycle and electron transport occur in the mitochondria and do require oxygen. 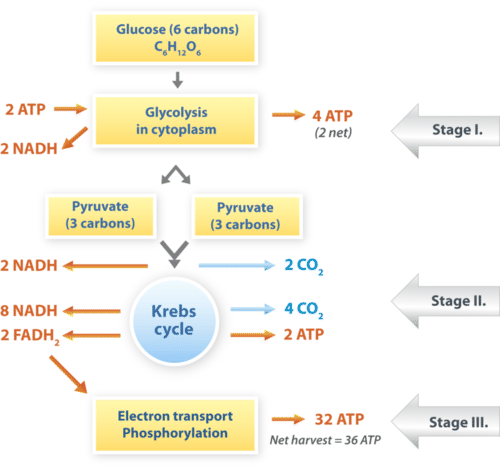 Cellular respiration takes place in the stages shown here. The process begins with a molecule of glucose, which has six carbon atoms. What happens to each of these atoms of carbon?

Structure of the Mitochondrion: Key to Aerobic Respiration

The structure of the mitochondrion is key to the process of aerobic (in the presence of oxygen) cellular respiration, especially the Krebs cycle and electron transport. A diagram of a mitochondrion is shown in the figure below. 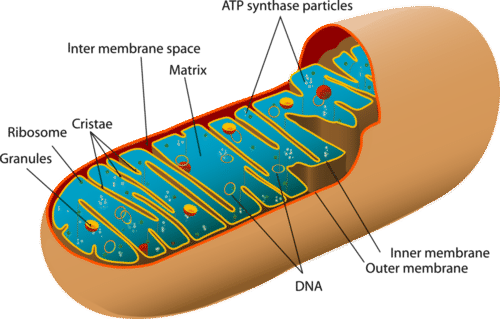 The structure of a mitochondrion is defined by an inner and outer membrane. This structure plays an important role in aerobic respiration.