Does a cell have its own ER?

Yes, but in this case, the ER is not just for emergencies. True, there might be times when the cell responds to emergency conditions and the functions of the ER may be needed, but usually the cell’s ER is involved in normal functions. Proteins are also made on the outside of the ER, and this starts a whole process of protein transport, both around the inside of the cell and to the cell membrane and out.

In addition to the nucleus, eukaryotic cells have many other organelles, including the endoplasmic reticulum, Golgi apparatus, vesicles, vacuoles, and centrioles.

The endoplasmic reticulum (ER) (plural, reticuli) is a network of phospholipid membranes that form hollow tubes, flattened sheets, and round sacs. These flattened, hollow folds and sacs are called cisternae. The ER has two major functions: 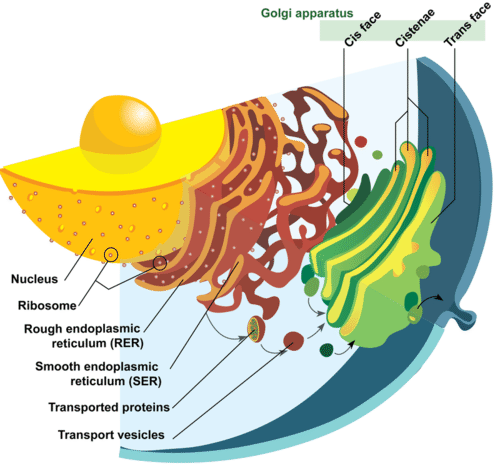 A vesicle is a small, spherical compartment that is separated from the cytosol by at least one lipid bilayer. Many vesicles are made in the Golgi apparatus and the endoplasmic reticulum, or are made from parts of the cell membrane. Vesicles from the Golgi apparatus can be seen in the figure above. Because it is separated from the cytosol, the space inside the vesicle can be made to be chemically different from the cytosol. Vesicles are basic tools of the cell for organizing metabolism, transport, and storage of molecules. Vesicles are also used as chemical reaction chambers. They can be classified by their contents and function.

Vacuoles are membrane-bound organelles that can have secretory, excretory, and storage functions. Many organisms will use vacuoles as storage areas and some plant cells have very large vacuoles. Vesicles are much smaller than vacuoles and function in transporting materials both within and to the outside of the cell.

Centrioles are rod-like structures made of short microtubules. Nine groups of three microtubules make up each centriole. Two perpendicular centrioles make up the centrosome. Centrioles are very important in cellular division, where they arrange the mitotic spindles that pull the chromosome apart during mitosis.