Biological organization exists at all levels in organisms. It can be seen at the smallest level, in the molecules that made up such things as DNA and proteins, to the largest level, in an organism such as a blue whale, the largest mammal on Earth. Similarly, single celled prokaryotes and eukaryotes show order in the way their cells are arranged.

Single-celled organisms such as an amoeba are free-floating and independent-living. Their single-celled “bodies” are able to carry out all the processes of life, such as metabolism and respiration, without help from other cells. Some single-celled organisms, such as bacteria, can group together and form a biofilm. A biofilm is a large grouping of many bacteria that sticks to a surface and makes a protective coating over itself. Biofilms can show similarities to multicellular organisms. Division of labor is the process in which one group of cells does one job (such as making the “glue” that sticks the biofilm to the surface), while another group of cells does another job (such as taking in nutrients). 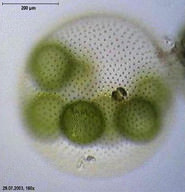 Colonial algae of the genus Volvox.

Each Volvox, shown in the figure above, is a colonial organism. It is made up of between 1,000 to 3,000 photosynthetic algae that are grouped together into a hollow sphere. The sphere has a distinct front and back end. The cells have eyespots, which are more developed in the cells near the front. This enables the colony to swim towards light.

Scientists think that multicellularity arose from cooperation between many organisms of the same species. The Colonial Theory proposes that this cooperation led to the development of a multicellular organism. Many examples of cooperation between organisms in nature have been observed. For example, a certain species of amoeba (a single-celled protist) groups together during times of food shortage and forms a colony that moves as one to a new location. Some of these amoebas then become slightly differentiated from each other. Volvox, shown in the figure above, is another example of a colonial organism. Most scientists accept that the Colonial Theory explains how multicellular organisms evolved.

Levels of Organization in Multicellular Organisms

The simplest living multicellular organisms, sponges, are made of many specialized types of cells that work together for a common goal. Such cell types include digestive cells, tubular pore cells, and epidermal cells. Though the different cell types create a large, organized, multicellular structure — the visible sponge — they are not organized into true interconnected tissues. If a sponge is broken up by passing it through a sieve, the sponge will reform on the other side. However, if the sponge’s cells are separated from each other, the individual cell types cannot survive alone. Simpler colonial organisms, such as members of the genus Volvox, as shown in the figure above, differ in that their individual cells are free-living and can survive on their own if separated from the colony.

This roundworm, a multicellular organism, was stained to highlight the nuclei of all the cells in its body (red dots).

A tissue is a group of connected cells that have a similar function within an organism. More complex organisms such as jellyfish, coral, and sea anemones have a tissue level of organization. For example, jellyfish have tissues that have separate protective, digestive, and sensory functions.

Even more complex organisms, such as the roundworm shown in the figure above, while also having differentiated cells and tissues, have an organ level of development. An organ is a group of tissues that has a specific function or group of functions. Organs can be as primitive as the brain of a flatworm (a group of nerve cells), as large as the stem of a sequoia (up to 90 meters, or 300 feet, in height), or as complex as a human liver.

The most complex organisms (such as mammals, trees, and flowers) have organ systems. An organ system is a group of organs that act together to carry out complex related functions, with each organ focusing on a part of the task. An example is the human digestive system, in which the mouth ingests food, the stomach crushes and liquifies it, the pancreas and gall bladder make and release digestive enzymes, and the intestines absorb nutrients into the blood.