Where do cells come from?

No matter what the cell, all cells come from preexisting cells through the process of cell division. The cell may be the simplest bacterium or a complex muscle, bone, or blood cell. The cell may comprise the whole organism, or be just one cell of trillions.

You consist of a great many cells, but like all other organisms, you started life as a single cell. How did you develop from a single cell into an organism with trillions of cells? The answer is cell division. After cells grow to their maximum size, they divide into two new cells. These new cells are small at first, but they grow quickly and eventually divide and produce more new cells. This process keeps repeating in a continuous cycle.

Cell division is the process in which one cell, called the parent cell, divides to form two new cells, referred to as daughter cells. How this happens depends on whether the cell is prokaryotic or eukaryotic.

Most prokaryotic cells divide by the process of binary fission. A bacterial cell dividing this way is depicted in the figure below. 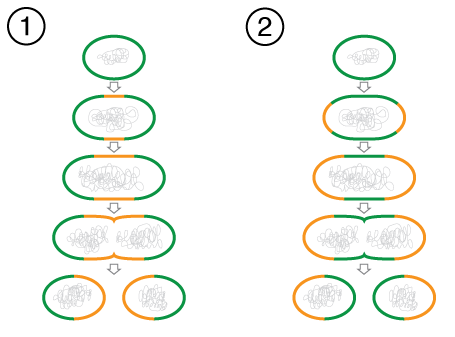 Binary fission can be described as a series of steps, although it is actually a continuous process. The steps are described below and also illustrated in the figure below. They include DNA replication, chromosome segregation, and finally the separation into two daughter cells. 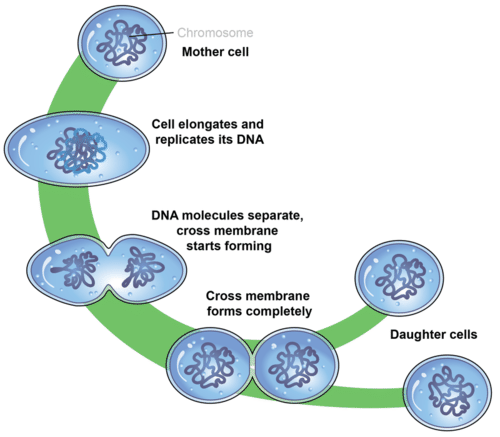 Steps of Binary Fission. Prokaryotic cells divide by binary fission. This is also how many single-celled organisms reproduce.

Cell division is more complex in eukaryotes than prokaryotes. Prior to dividing, all the DNA in a eukaryotic cell’s multiple chromosomes is replicated. Its organelles are also duplicated. Then, when the cell divides, it occurs in two major steps:

Science Friday: The Axolotl: A Cut Above the Rest

The axolotl is an animal with the incredible ability to regenerate its legs. In this video by , Dr. Susan Bryant discusses the research on how these animals are able to accomplish this amazing feat.