Other than being green, what do all these fruits and vegetables have in common?

They are full of energy. Energy in the form of glucose. The energy from sunlight is briefly held in NADPH and ATP, which is needed to drive the formation of sugars such as glucose. And this all happens in the Calvin cycle.

You’ve learned that the first, light-dependent stage of photosynthesis uses two of the three reactants, water and light, and produces one of the products, oxygen gas (a waste product of this process). All three necessary conditions are required â€“ chlorophyll pigments, the chloroplast “theater,” and enzyme catalysts. The first stage transforms light energy into chemical energy, stored to this point in molecules of ATP and NADPH. Look again at the overall equation below. What is left?

Waiting in the wings is one more reactant, carbon dioxide, and yet to come is the star product, which is food for all life â€“ glucose. These key players perform in the second act of the photosynthesis drama, in which food is “made from thin air!”

The second stage of photosynthesis can proceed without light, so its steps are sometimes called “light-independent” or “dark” reactions (though the term “dark” reactions can be misleading). Many biologists honor the scientist, Melvin Calvin, who won a 1961 Nobel Prize for working out this complex set of chemical reactions, naming it the Calvin cycle.

The Calvin cycle has two parts. First carbon dioxide is “fixed”. Then ATP and NADPH from the light reactions provide energy to combine the fixed carbons to make sugar.

Why does carbon dioxide need to be fixed? Was it ever broken?

Life on Earth is carbon-based. Organisms need not only energy but also carbon atoms for building bodies. For nearly all life, the ultimate source of carbon is carbon dioxide (CO2), an inorganic molecule. CO2 makes up less than 1% of the Earth’s atmosphere.

Animals and most other heterotrophs cannot take in CO2 directly. They must eat other organisms or absorb organic molecules to get carbon. Only autotrophs can build low-energy inorganic CO2 into high-energy organic molecules like glucose. This process is carbon fixation. 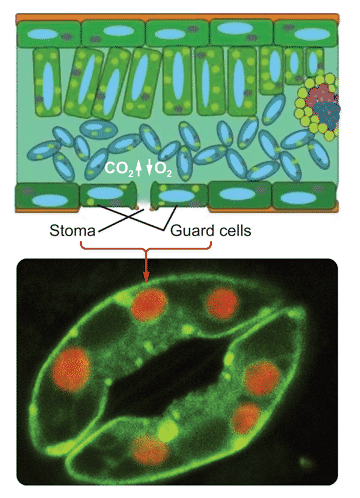 Stomata on the underside of leaves take in CO2 and release water and O2. Guard cells close the stomata when water is scarce. Leaf cross-section (above) and stoma (below).

The most common pathway combines one molecule of CO2 with a 5-carbon sugar called ribulose biphosphate (RuBP). The enzyme which catalyzes this reaction (nicknamed RuBisCo) is the most abundant enzyme on earth! The resulting 6-carbon molecule is unstable, so it immediately splits into two 3-carbon molecules. The 3 carbons in the first stable molecule of this pathway give this largest group of plants the name “C3.”

Dry air, hot temperatures, and bright sunlight slow the C3 pathway for carbon fixation. This is because stomata, tiny openings under the leaf which normally allow CO2 to enter and O2 to leave, must close to prevent loss of water vapor (the figure above). Closed stomata lead to a shortage of CO2. Two alternative pathways for carbon fixation demonstrate biochemical adaptations to differing environments.

Plants such as corn solve the problem by using a separate compartment to fix CO2. Here CO2 combines with a 3-carbon molecule, resulting in a 4-carbon molecule. Because the first stable organic molecule has four carbons, this adaptation has the name C4. Shuttled away from the initial fixation site, the 4-carbon molecule is actually broken back down into CO2, and when enough accumulates, RuBisCo fixes it a second time! Compartmentalization allows efficient use of low concentrations of carbon dioxide in these specialized plants.

Cacti and succulents such as the jade plant avoid water loss by fixing CO2 only at night. These plants close their stomata during the day and open them only in the cooler and more humid nighttime hours. Leaf structure differs slightly from that of C4 plants, but the fixation pathways are similar. The family of plants in which this pathway was discovered gives the pathway its name, Crassulacean Acid Metabolism, or CAM (the figure below). All three carbon fixation pathways lead to the Calvin cycle to build sugar.

How Does the Calvin Cycle Store Energy in Sugar?

As Melvin Calvin discovered, carbon fixation is the first step of a cycle. Like an electron transport chain, the Calvin cycle, shown in the figure below, transfers energy in small, controlled steps. Each step pushes molecules uphill in terms of energy content. Recall that in the electron transfer chain, excited electrons lose energy to NADPH and ATP. In the Calvin cycle, NADPH and ATP formed in the light reactions lose their stored chemical energy to build glucose.

Use the figure below to identify the major aspects of the process: 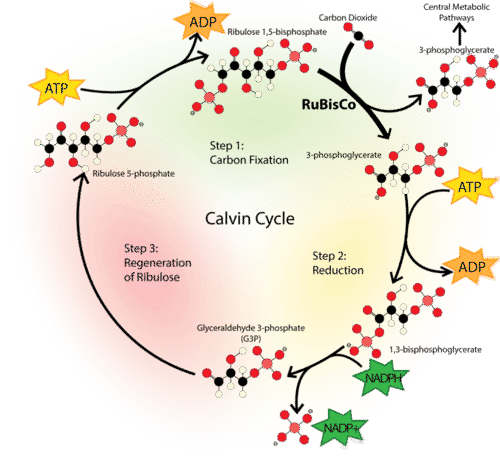 Overview of the Calvin Cycle Pathway.

First, notice where carbon is fixed by the enzyme nicknamed RuBisCo. In C3, C4, and CAM plants, CO2 enters the cycle by joining with 5-carbon ribulose bisphosphate to form a 6-carbon intermediate, which splits (so quickly that it isn’t even shown!) into two 3-carbon molecules.

Now look for the points at which ATP and NADPH (made in the light reactions) add chemical energy (“Reduction” in the diagram) to the 3-carbon molecules. The resulting “half-sugars” can enter several different metabolic pathways. One recreates the original 5-carbon precursor, completing the cycle. A second combines two of the 3-carbon molecules to form glucose, universal fuel for life.

The cycle begins and ends with the same molecule, but the process combines carbon and energy to build carbohydrates â€“ food for life.

So, how does photosynthesis store energy in sugar? Six “turns” of the Calvin cycle use chemical energy from ATP to combine six carbon atoms from six CO2 molecules with 12 “hot hydrogens” from NADPH. The result is one molecule of glucose, C6H12O6.