Name one major difference between a plant and an animal.

There are many differences, but in terms of energy, it all starts with sunlight. Plants absorb the energy from the sun and turn it into food. You can sit in the sun for hours and hours. You will feel warm, but you’re not going to absorb any energy. You have to eat to obtain your energy.

Living organisms obtain chemical energy in one of two ways.

Autotrophs, shown in the figure below, store chemical energy in carbohydrate food molecules they build themselves. Food is chemical energy stored in organic molecules. Food provides both the energy to do work and the carbon to build bodies. Because most autotrophs transform sunlight to make food, we call the process they use photosynthesis. Only three groups of organisms – plants, algae, and some bacteria – are capable of this life-giving energy transformation. Autotrophs make food for their own use, but they make enough to support other life as well. Almost all other organisms depend absolutely on these three groups for the food they produce. The producers, as autotrophs are also known, begin food chains which feed all life. Food chains will be discussed in the “Food Chains and Food Webs” concept.

Heterotrophs cannot make their own food, so they must eat or absorb it. For this reason, heterotrophs are also known as consumers. Consumers include all animals and fungi and many protists and bacteria. They may consume autotrophs or other heterotrophs or organic molecules from other organisms. Heterotrophs show great diversity and may appear far more fascinating than producers. But heterotrophs are limited by our utter dependence on those autotrophs that originally made our food. If plants, algae, and autotrophic bacteria vanished from earth, animals, fungi, and other heterotrophs would soon disappear as well. All life requires a constant input of energy. Only autotrophs can transform that ultimate, solar source into the chemical energy in food that powers life, as shown in the figure below. 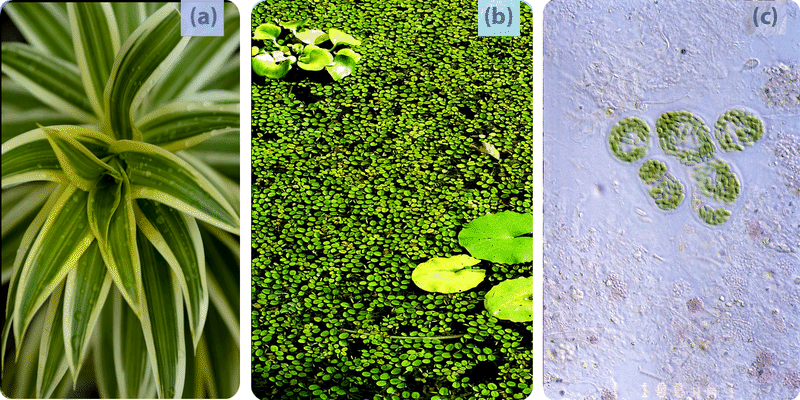 Photosynthetic autotrophs, which make food using the energy in sunlight, include (a) plants, (b) algae, and (c) certain bacteria.

Photosynthesis provides over 99 percent of the energy for life on earth. A much smaller group of autotrophs – mostly bacteria in dark or low-oxygen environments – produce food using the chemical energy stored in inorganic molecules such as hydrogen sulfide, ammonia, or methane. While photosynthesis transforms light energy to chemical energy, this alternate method of making food transfers chemical energy from inorganic to organic molecules. It is therefore called chemosynthesis, and is characteristic of the tubeworms shown in the figure below. Some of the most recently discovered chemosynthetic bacteria inhabit deep ocean hot water vents or “black smokers.” There, they use the energy in gases from the Earth’s interior to produce food for a variety of unique heterotrophs: giant tube worms, blind shrimp, giant white crabs, and armored snails. Some scientists think that chemosynthesis may support life below the surface of Mars, Jupiter’s moon, Europa, and other planets as well. Ecosystems based on chemosynthesis may seem rare and exotic, but they too illustrate the absolute dependence of heterotrophs on autotrophs for food. 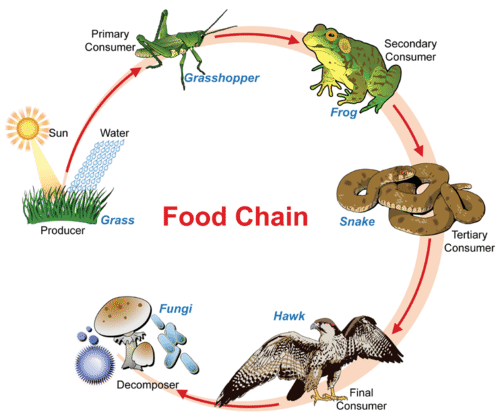 A food chain shows how energy and matter flow from producers to consumers. Matter is recycled, but energy must keep flowing into the system. Where does this energy come from? Though this food chains “ends” with decomposers, do decomposers, in fact, digest matter from each level of the food chain? (see the “Flow of Energy” concept.) 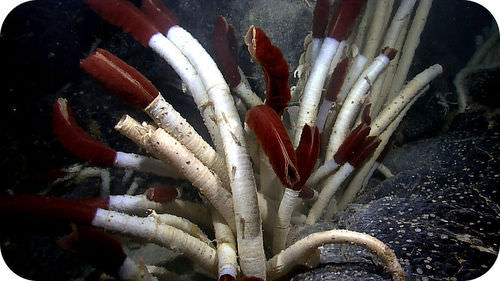 Tubeworms deep in the Galapagos Rift get their energy from chemosynthetic bacteria living within their tissues. No digestive systems needed!

The flow of energy through living organisms begins with photosynthesis. This process stores energy from sunlight in the chemical bonds of glucose. By breaking the chemical bonds in glucose, cells release the stored energy and make the ATP they need. The process in which glucose is broken down and ATP is made is called cellular respiration.

Photosynthesis and cellular respiration are like two sides of the same coin. This is apparent from the figure below. The products of one process are the reactants of the other. Together, the two processes store and release energy in living organisms. The two processes also work together to recycle oxygen in Earth’s atmosphere. 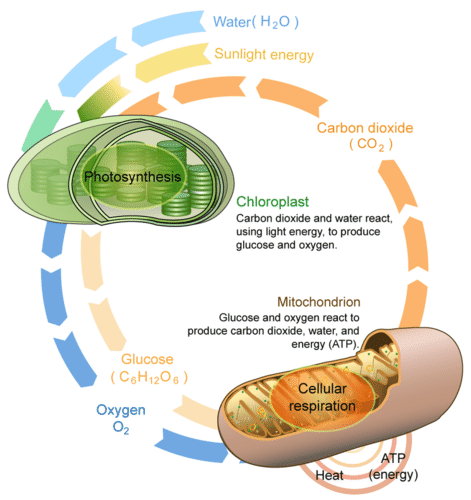 This diagram compares and contrasts photosynthesis and cellular respiration. It also shows how the two processes are related.

Photosynthesis is often considered to be the single most important life process on Earth. It changes light energy into chemical energy and also releases oxygen. Without photosynthesis, there would be no oxygen in the atmosphere. Photosynthesis involves many chemical reactions, but they can be summed up in a single chemical equation:

Photosynthetic autotrophs capture light energy from the sun and absorb carbon dioxide and water from their environment. Using the light energy, they combine the reactants to produce glucose and oxygen, which is a waste product. They store the glucose, usually as starch, and they release the oxygen into the atmosphere.

Cellular respiration actually “burns” glucose for energy. However, it doesn’t produce light or intense heat as some other types of burning do. This is because it releases the energy in glucose slowly, in many small steps. It uses the energy that is released to form molecules of ATP. Cellular respiration involves many chemical reactions, which can be summed up with this chemical equation: