Why do atoms bond?

Chemical Bonds: Why do atoms bond?

As we begin this section, it’s important to remember that what we will go on to discuss is a model of bonding, that is based on a particular model of the atom. You will remember from the discussion on atoms (in Grade \(\text{10}\)) that a model is a representation of what is happening in reality. In the model of the atom that you are learnt in Grade \(\text{10}\), the atom is made up of a central nucleus, surrounded by electrons that are arranged in fixed energy levels (sometimes called shells). Within each energy level, electrons move in orbitals of different shapes. The electrons in the outermost energy level of an atom are called the valence electrons. This model of the atom is useful in trying to understand how different types of bonding take place between atoms.

A model takes what we see in the world around us and uses that to make certain predictions about what we cannot see. 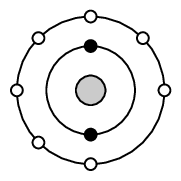 The following points were made in these earlier discussions on electrons and energy levels:

This article has been modified from "Chemical Bonds, by Siyavula, Grade 11 Science, CC BY 4.0. Download the article for free at Siyavula.

This is a lesson from the tutorial, Bonding and Atomic Combinations and you are encouraged to log in or register, so that you can track your progress.