Let’s start by imagining that there are two hydrogen atoms approaching one another. As they move closer together, there are three forces that act on the atoms at the same time. These forces are described below:

These three forces work together when two atoms come close together. As the total force experienced by the atoms changes, the amount of energy in the system also changes.

Now look at the figure below to understand the energy changes that take place when the two atoms move towards each other. 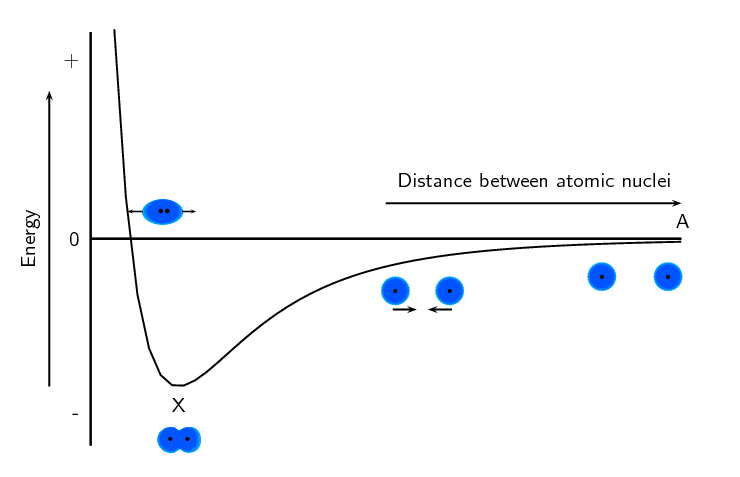 Graph showing the change in energy that takes place as two hydrogen atoms move closer together.

At point X, the attractive and repulsive forces acting on the two hydrogen atoms are balanced. The energy of the system is at a minimum.

Further to the left of point X, the repulsive forces are stronger than the attractive forces and the energy of the system increases.

For hydrogen the energy at point X is low enough that the two atoms stay together and do not break apart again. This is why when we draw the Lewis diagram for a hydrogen molecule we draw two hydrogen atoms next to each other with an electron pair between them.

We also note that this arrangement gives both hydrogen atoms a full outermost energy level (through the sharing of electrons or covalent bonding).

Case 2: A bond does not form

Now if we look at helium we see that each helium atom has a filled outer energy level. Looking at the figure below, we find that the energy minimum for two helium atoms is very close to zero. This means that the two atoms can come together and move apart very easily and never actually stick together. 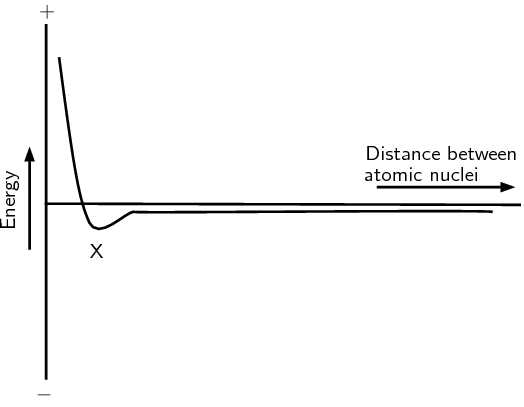 Graph showing the change in energy that takes place as two helium atoms move closer together.

For helium the energy minimum at point X is not low enough that the two atoms stay together and so they move apart again. This is why when we draw the Lewis diagram for helium we draw one helium atom on its own. There is no bond.

We also see that helium already has a full outermost energy level and so no compound forms.

This article has been modified from "Chemical Bonds, by Siyavula, Grade 11 Science, CC BY 4.0. Download the article for free at Siyavula.

This is a lesson from the tutorial, Bonding and Atomic Combinations and you are encouraged to log in or register, so that you can track your progress.