You may have been told proteins are good for you. Do these look good to you?

Proteins as food. To you, these may not look appetizing (or they might), but they do provide a nice supply of amino acids, the building blocks of proteins. Proteins have many important roles, from transporting, signaling, receiving, and catalyzing to storing, defending, and allowing for movement. Where do you get the amino acids needed so your cells can make their own proteins? If you cannot make it, you must eat it. 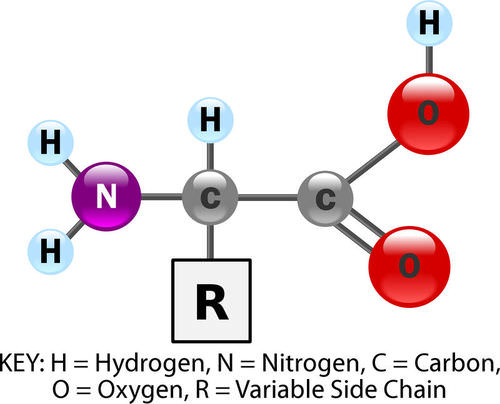 When amino acids bind together, they form a long chain called a polypeptide. A protein consists of one or more polypeptide chains. A protein may have up to four levels of structure. The lowest level, a protein’s primary structure, is its sequence of amino acids. Higher levels of protein structure are described in the figure below. The complex structures of different proteins give them unique properties, which they need to carry out their various jobs in living organisms. 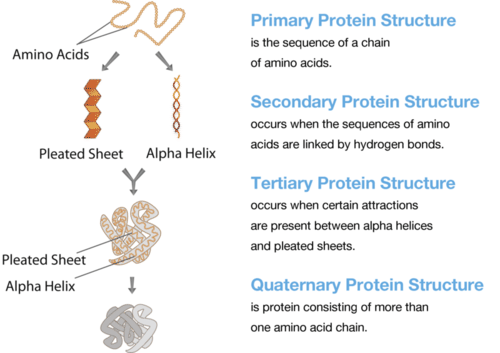 Proteins play many important roles in living things. Some proteins help cells keep their shape (structural proteins), some, such as connective and motor proteins, make up muscle tissues, and some transport items in and out of cells (transport proteins). Some proteins act as signals, and other proteins receive those signals. Enzymes are proteins that speed up chemical reactions in cells. Other proteins are antibodies, which bind to foreign substances such as bacteria and target them for destruction. Still other proteins carry messages or transport materials. For example, human red blood cells contain a protein called hemoglobin, which binds with oxygen. Hemoglobin allows the blood to carry oxygen from the lungs to cells throughout the body. A model of the hemoglobin molecule is shown in the figure below. 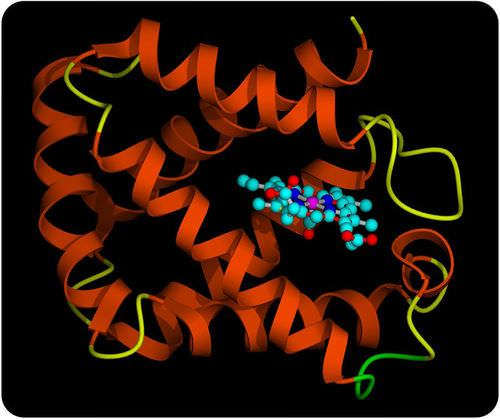 Hemoglobin Molecule. This model represents the protein hemoglobin. The purple part of the molecule contains iron. The iron binds with oxygen molecules.

Proteins in the diet are necessary for life. Dietary proteins are broken down into their component amino acids when food is digested. Cells can then use the components to build new proteins. Humans are able to synthesize all but eight of the twenty common amino acids. These eight amino acids, called essential amino acids, must be consumed in foods. Like dietary carbohydrates and lipids, dietary proteins can also be broken down to provide cells with energy.

How useful is worm spit? It turns out that worm spit, also known as silk, is a very useful material in medicine. In this video by Science Friday, Dr. David Kaplan describes how silk is used in a variety of medical applications.