You may have heard that something is “encoded in your DNA.” What does that mean?

Nucleic acids. Essentially the “instructions” or “blueprints” of life. Deoxyribonucleic acid, or DNA, is the unique blueprints to make the proteins that give you your traits. Half of these blueprints come from your mother, and half from your father. Therefore, every person that has ever lived – except for identical twins – has his or her own unique set of blueprints – or instructions – or DNA.

If you look at the figure below, you will see that the sugar of one nucleotide binds to the phosphate group of the next nucleotide. These two molecules alternate to form the backbone of the nucleotide chain. This backbone is known as the sugar-phosphate backbone.

The nitrogen bases in a nucleic acid stick out from the backbone. There are four different types of bases: cytosine (C), adenine (A), guanine (G), and either thymine (T) in DNA, or uracil (U) in RNA. In DNA, bonds form between bases on the two nucleotide chains and hold the chains together. Each type of base binds with just one other type of base: cytosine always binds with guanine, and adenine always binds with thymine. These pairs of bases are called complementary base pairs. 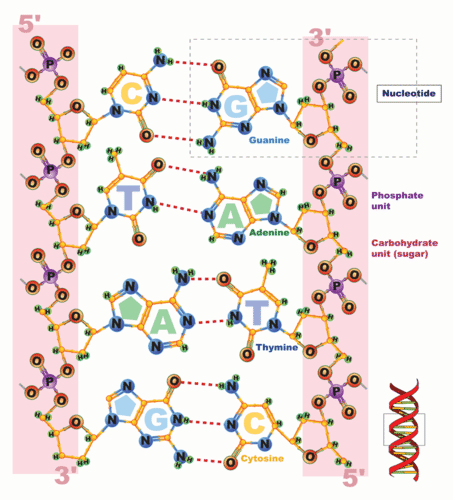 The binding of complementary bases allows DNA molecules to take their well-known shape, called a double helix, which is shown in the figure below. A double helix is like a spiral staircase. The double helix shape forms naturally and is very strong, making the two polynucleotide chains difficult to break apart. 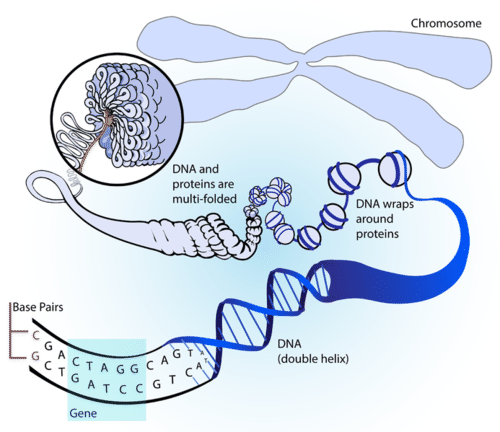 DNA Molecule. Bonds between complementary bases help form the double helix of a DNA molecule. The letters A, T, G, and C stand for the bases adenine, thymine, guanine, and cytosine. The sequence of these four bases in DNA is a code that carries instructions for making proteins. Shown is how the DNA winds into a chromosome.

DNA is also known as the hereditary material or genetic information. It is found in genes, and its sequence of bases makes up a code. Between “starts” and “stops,” the code carries instructions for the correct sequence of amino acids in a protein (see the figure below). DNA and RNA have different functions relating to the genetic code and proteins. Like a set of blueprints, DNA contains the genetic instructions for the correct sequence of amino acids in proteins. RNA uses the information in DNA to assemble the correct amino acids and help make the protein. The information in DNA is passed from parent cells to daughter cells whenever cells divide. The information in DNA is also passed from parents to offspring when organisms reproduce. This is how inherited characteristics are passed from one generation to the next.

The letters G, U, C, and A stand for the bases in RNA. Each group of three bases makes up a code word, and each code word represents one amino acid (represented here by a single letter, such as V, H, or L). A string of code words specifies the sequence of amino acids in a protein.